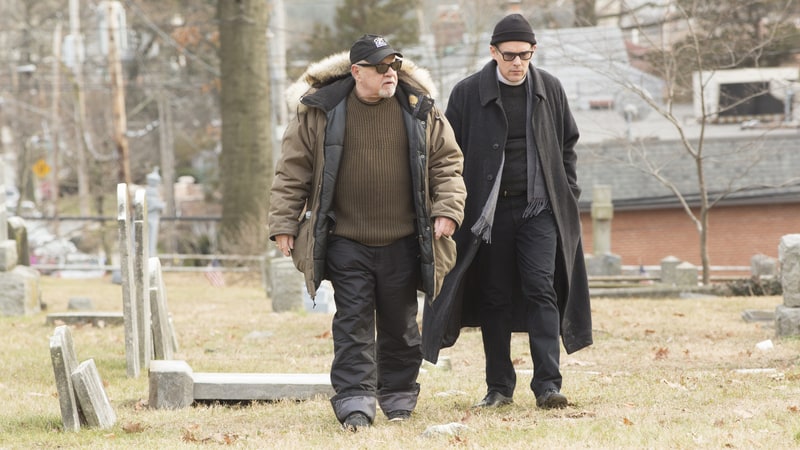 Schrader and Hawke on set / Via

Writer-director Paul Schrader and star Ethan Hawke attended a screening of their new film First Reformed at the Aero Theatre in Santa Monica, California on May 10.

Afterwards, they discussed many of the cinematic influences on the movie, including Robert Bresson, Ingmar Bergman, Yasujirō Ozu, Carl Dreyer, and Andrei Tarkovsky, as well as philosophers such as Søren Kierkegaard.

Schrader also admitted he didn’t realize how similar First Reformed was to Taxi Driver (which he wrote, but did not direct), until he was in the editing room.

Q: Have you been thinking of doing this movie for a long time?

Schrader: “I’ve been thinking of not doing this movie for a long time. (Audience laughs). Even when people would try to connect my work to that book (“Transcendental Style In Film,” about directors Ozu, Bresson and Dreyer) and I thought, ‘No, no, that’s not me.’ I like those films, I’ve written about those films. But I’m too intoxicated with acting and sex and violence. I’m really not the guy to make that film. You will never, ever catch me skating on that Bressonian ice. And that’s the way it was, until about three years ago. I was at an awards ceremony for the New York Society of Film Critics. I gave an award to Pawel Pawlikowski and we were talking about spiritual style. Walking uptown that night, I said, ‘You’re going to be 70 next year. It’s time now. It is time to write that movie that you swore you’ll never write.’ And that’s when the decision was made. After that, it started falling in line very quickly. It took a few months to write the script, but it took 50 years to decide to write it.”

This is the most economical of all your scripts….

Schrader: “After a kind of disastrous experience five years ago, I started getting final cut. The first time I got final cut on Dog Eat Dog, I used it to be outrageous and foul-mouthed and vulgar and profane. The next time, I said, ‘I think I’ll use final cut to do the opposite and be restrained.’

Ethan, how do you convey that your character (a pastor in the midst of a spiritual crisis) is functional on the outside, but inside is consumed with spiritual anguish?

Hawke: “When we first sat and talked about the script, we talked about a performance that doesn’t try to entertain. It was a challenge, one that I find really exciting. Of course, it requires great writing. It was what was unique about making this movie.” 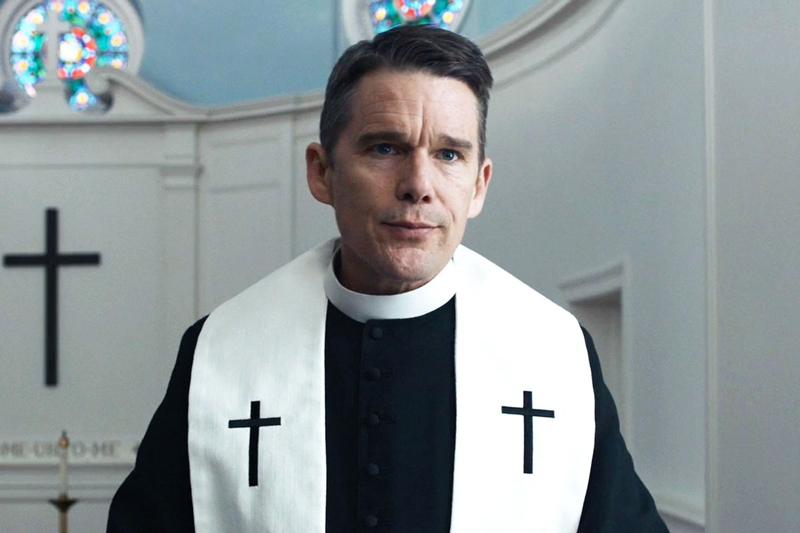 Were you daunted by playing a Schrader character and following in the footsteps of Robert De Niro as Travis Bickle?

Hawke: “It’s the same thing as when you’re dealing with a Sam Shepard play. You’re operating as part of a lineage. Anyone who has a voice, this thing we call “voice.” (Hawke will star in Sam Shepard’s landmark play True West with Paul Dano on Broadway this December). That’s the thing about serious writers. There’s a voice. But then it speaks to itself, all of Sam’s work, all of Paul’s work. You can look for connections if you want to find them.

To be honest, I don’t think that was valuable to me (to look back at De Niro’s performance.) I was more interested in taking Toller for who he was. It all seemed very new to me. It’s obviously built from Winter Light and all these other influences that Paul speaks about. I’ve seen these films and studied them for other reasons been very moved. One of the things I like Bergman versus Bresson is that Bergman likes actors. (Audience laughs). I always feel like Bergman used a lot of his actors’ personas to incorporate into the film. I value my profession and I take it seriously, so I wanted to be of service to Paul.

Paul, what made you think of Ethan and Amanda for these roles?

Schrader: “Well, when you’re writing a script, you try not to think of actors because it makes you a lazy writer. It makes you imagine the actor reading your lines. But about halfway through this, I started getting these prototypes, a certain kind of American male — Oscar Isaac, Jake Gyllenhaal, Ethan Hawke. And Ethan had 10 years on these other guys, and his face had gotten to a place that is very, very interesting to me. (Ethan grins and points at his face; the audience laughs.) Like Montgomery Clift in I Confess. And so as soon as I finished the script, I sent it to him and he called me the next day. So we were on board with that.

Once I started scraping together some money, the financial people came and gave us 10 actresses who would fall into their parameters. A couple seemed more right than others. Kristen Stewart, Scarlett Johansson, and Amanda. I thought, “That’s interesting” (about Amanda). And then I was told ‘she’s not responding to any work right now.’ I said, ‘Well, send her the script anyway.’.” 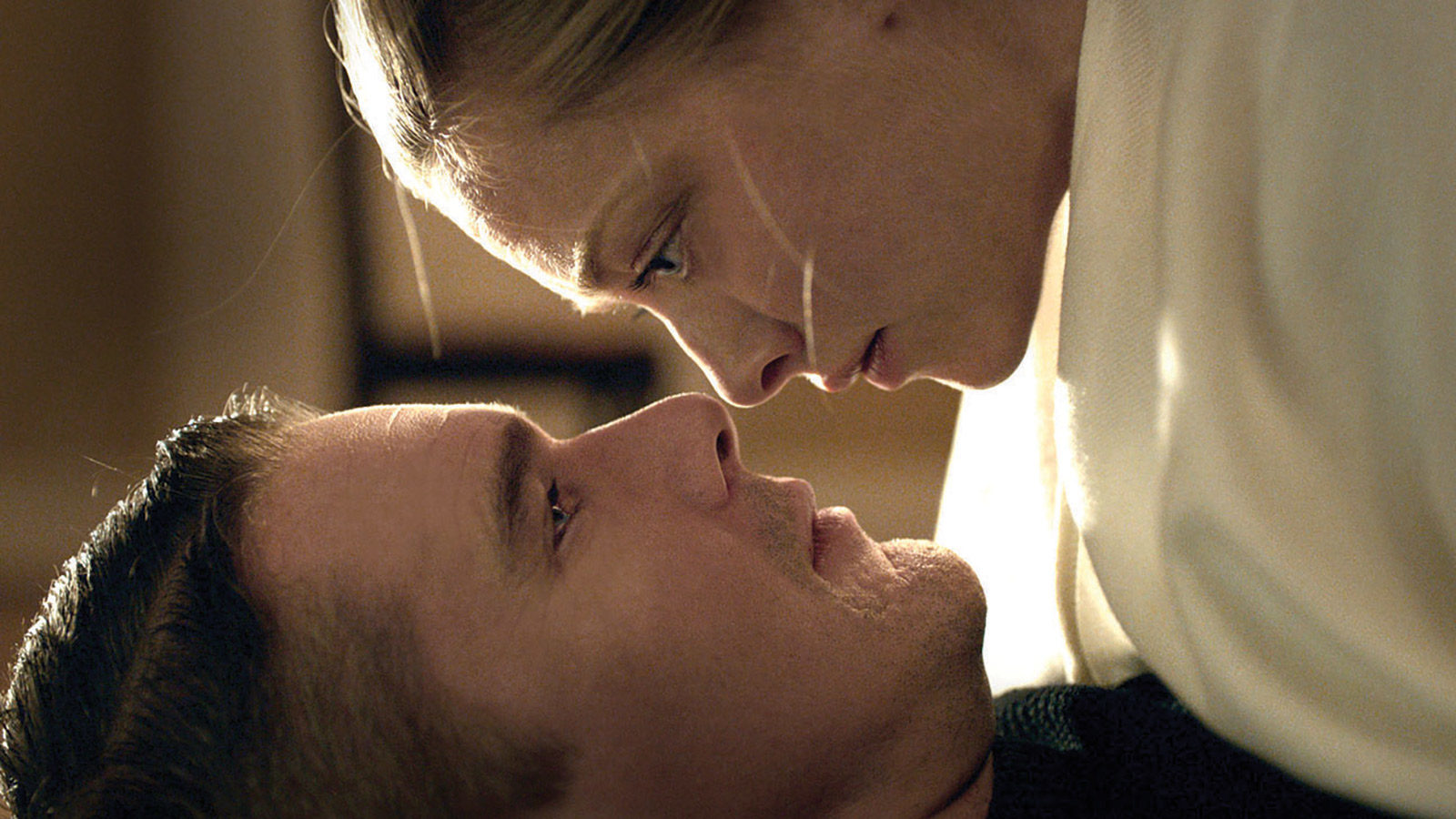 Well, she wasn’t responding to any work because she was in fact pregnant. I met with her and she said, ‘I wasn’t planning to work but I think this is kind of a great idea to play this pregnant character while I’m pregnant. But of course, I’ve got a stop date.’ Which actually turned out to my advantage, because in preproduction, we’re trying to get cash flow and they hate to give you cash flow. I called the financial group and said, ‘Look, if we don’t get cash flow on Monday, we lose Amanda and I have her obstetrician’s phone number right in front of me. You’re free to call him, but I don’t think this is going to be a negotiation.’ And yes, they got the cash flowing.

Is it challenging making such a contemplative film on such a shorter schedule and a lower budget?

Schrader: “In the ’70s or ’80s, this would be a 45-day film. It’s now a 20-day film. So that means, in relative dollars, it’s actually costing half as much. I think Ethan agrees with me that it’s probably a good thing. You never get out of the zone. You never go to your trailer. You’re shooting all the time. Biff, bam, pow. It used to be you’d block a scene and you’d sit in a trailer for three hours. Now you never stop working. You get more raw footage in 20 days than you used to get in 45. I think Ethan, as an actor, prefers to do that.”

Hawke: “The cinematographer used to kind of own the set and dictated time: ‘This is when you work, this is when you don’t work.’ And now, it’s always on. And it’s actually easier because of what Paul said. You can find a rhythm, stay in the rhythm, you find the voice and stay with the voice.

It used to be hours in your trailer trying to navigate how to be ready when you’re called. And now you just have to be ready all the time, it’s actually easier. It helps my marriage and everything like that. (Audience laughs). Because it’s easier to deal with an asshole for five weeks than for 10 weeks.” 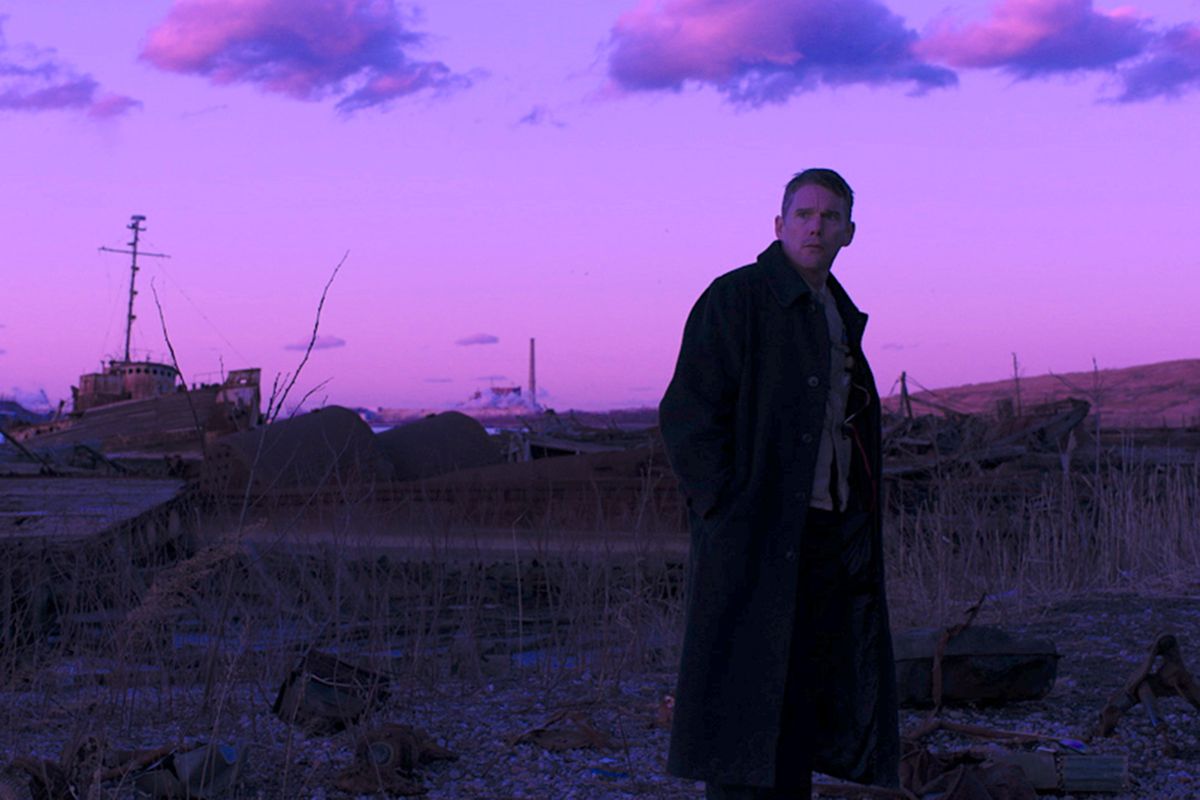 Here are some of the highlights from the rest of the Q&A: