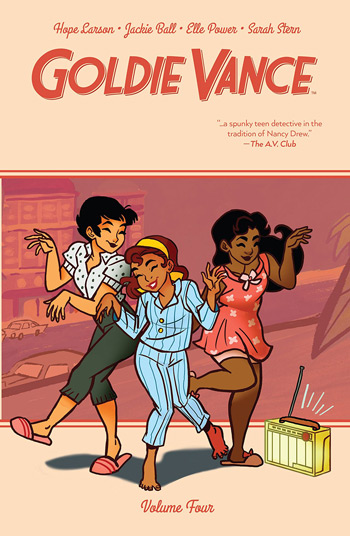 I suppose it’s the law of diminishing returns or the fact that few follow-ups ever equal the original.

That said, the latest Goldie Vance adventure is still a cut above most recent comic books and Goldie remains a delightful, resourceful young heroine.

The most annoying thing about this entry is not being able to determine exactly when it takes place.

Previously, it was explicitly pointed out that 16-year-old Goldie’s adventures are set in the early 1960s, although purposely unclear as to an exact date.

This one however, deals with a rock music festival, something which didn’t exist until mid-decade and didn’t become commonplace until the early ‘70s.

There are an awful lot of people of color in positions of power, again something just not seen that often in those days.

Throw in folks with hair lengths like the early ‘70s and a major new character who uses the as yet unused term “Ms.” and I was just very confused.

The fact that we’re once again dealing with the KGB, however, keeps us in the Cold War era.

The plot has a big music festival planned for the hotel where young Goldie works and her dad is in charge, just as his new boss comes in to take over. A mysterious series of power outages points to the Soviets and also in the direction of the powerful, anachronistically androgynous music executive who has come to town and seemingly won the heart of Goldie’s BFF and semi-secret paramour.

All of Goldie’s friends and acquaintances (including her mermaid mom) put in appearances at least, giving the impression that they all have their own lives to live when they aren’t caught up in our imaginative young detective’s proto-Scooby Gang.

Written by Jackie Ball with colorful, rather obviously manga-inspired art from Elle Power and covers by co-creator (along with Hope Larson) Brittney Williams, Goldie Vance Volume Four is an entertaining serial, alternately feeling well-paced and really stretched out. Overall, it’s a little less enjoyable than Volume Three, itself not quite up to Volumes One and Two.

I wish the confusion over a time period were less bothersome but I’ll concede that might be just my own hang-up. This series isn’t really written for males more than a half century old but rather for younger readers who most likely would never put that much thought into it. The characters themselves remain just so darn likable that you can’t wait for more…and the ending we’re given certainly points in that direction.