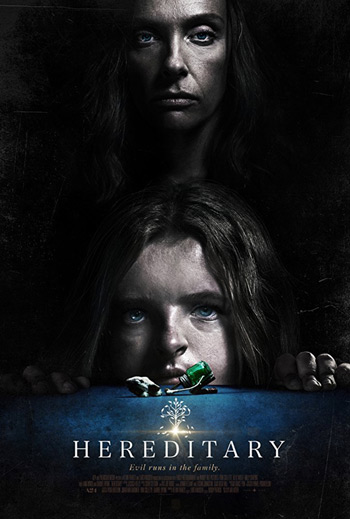 (This review is spoiler-free. I’d advise you to skip the trailer if you haven’t already seen it.)

With Annihilation, A Quiet Place, and The Ritual this has been a banner year for horror movies.

The debut film from writer-director Ari Aster is arguably the best of the bunch. It’s gloriously, insanely fucked up.

And I mean that in the best way possible.

It terrorized an unsuspecting audience when the trailer was accidentally paired with the family-friendly Peter Rabbit.

Those kids will probably be in therapy for life, just from the disturbing images in the trailer.

Even when you’re expecting an intense R-rated horror film, this is one film that won’t leave you soon.

Hereditary takes its time getting where it’s going, but maintains an almost unbearable level of dread throughout. From the first moment, the unsettling musical score by Colin Stetson puts you on notice that something profoundly terrible is going to happen, it’s just a question of when.

Just when you’re sure that it’s going to be Rosemary’s Baby or The Wicker Man or maybe even It Follows, the movie takes a sudden, sharp turn.

The film begins with the funeral of Ellen Leigh, the estranged mother of artist Annie Leigh (Toni Collette). Annie delivers a terse eulogy in which she mentions how “secretive and private” her mother was. She acknowledges that her mother was “a very difficult woman, which maybe explains me.”

Although losing their matriarch is hard, you slowly realize there isn’t a “before and after” for this family, and that nothing was ever really okay, especially for Annie.

She’s an artist who crafts miniature tableaux, often drawn from her own life. It’s hard to tell the difference between the enormous craftsman house they live in and Annie’s note-perfect miniatures and we are often tricked into thinking one is the other.

Annie’s daughter Charlie (newcomer Milly Shapiro) seems to miss Grandma the most as she was Grandma’s favorite. This strange, gloomy 13-year-old likes to draw and to build dolls out of odds and ends rather than hang out with kids her own age. And then there’s older brother Peter (Alex Wolff), who just wants to get high and not have to drag his sister along to parties. Husband Steve (Gabriel Byrne) is just trying to hold the family together as things begin to spiral out of control.

We get glimpses of what Ellen’s “secretive and private” life might have included, but “Mom’s Things” are shoved away in a box, not to be opened until near the end of the film.

The film’s leisurely pace actually helps tighten the screws on the audience. If it rushed to its reveals, we’d be less on edge. If it hit all the usual horror notes, and played them in the same key as every other horror film about a Creepy Dead Grandmother, we’d relax in knowing when and where to jump. Instead, the pacing is as offbeat as the score, until we’re not sure what to expect.

The jump scares are few here, just as in Robert Eggers’ The Witch, another horror debut that reveled in being strange and off-putting. But when both films commit, by God, they commit.