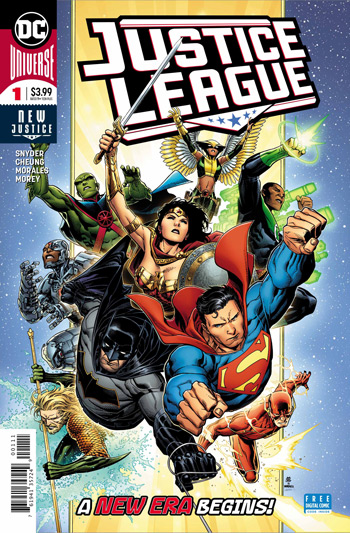 “Luthor I beg you. Kill me if you must. But the truth you seek. Don’t… it’s too horrible.”

Don’t you just love it when a plan comes together?

For that matter it looks like that’s how Lex Luthor must be feeling, too.

Too bad they’re the only ones who seem to have a clear idea of what’s actually happening.

Let me back up from that for a moment. Because first there’s a bunch about Justice League #1 that deserves praise.

Warning: There are great big spoilers ahead. Because there just ain’t no other way.

If that matters to you… just go buy the book and read it first. Believe me, it’s worth it.

For the rest of you, or for those who’ve read it already, it will be good to start by acknowledging that the DC Universe is… different now. Get used to it. Snyder and the top guns at DC have been hinting at this shift for some time, and indeed last month’s Justice League: No Justice event did everything it could to pretty much hit us over the head with it. But Snyder’s Justice League #1 makes it clear that all this was simply preamble.

Heck, in just this first issue alone, Mr. Snyder blows up the moon, and then for good measure he murders one of DC’s most notoriously tough immortals.

The message is clear: There are no rules. Not anymore. It seems, in this new DCU, that the lines are bolder, the colors a little brighter, and the darkness just a little stronger.

That allows for some new creative possibilities that I have to admit are pretty damn satisfying. A full page spread of the Hall of Justice in Washington DC, brand-spanking new and complete with a trophy room that includes costumes from all of DC’s prominent heroes, shifts the entire tenor of the League in one fell swoop.

No longer is this the New 52 assemblage of warriors birthed in the invasion of an intergalactic war, with a history as spotty as it was confusing. This is the League. A grand society of the world’s greatest superheroes, a mighty and colorful force for truth and justice in the world. It’s a reformulation that is both refreshingly new for our modern family of heroes, while at the same time, of course, drawing on a history that most long-time DC fans will find enthralling.

That genius it seems, is exactly the pay-off Scott Snyder has been building up to since he broke the universe in his Dark Metal saga, and I have to say it’s a masterstroke to unveil it in all its glory at the very outset of this series. Artist Jim Cheung is masterclass himself, and his excellent work as always sets the stage, along with a splendid tone for this series going forward.

But that’s nothing compared to the moment the Legion of Doom walks onto the page. Because you can’t have a Hall of Justice, without a Hall of Doom. Right? Sure, these are ideas that in almost any other headlining iteration of the League outside of our beloved childhood Saturday mornings would probably feel just this side of absurd.

(With apologies and kudos to Alex Ross with Jim Krueger and Mark Waid, respectively, for being two notable exceptions to that rule. Check out both of the specially formatted projects Justice and Kingdom Come, if for some reason you haven’t already.)

But who amongst us has not begun to wonder recently whether we’ve become trapped in a Saturday morning cartoon ourselves? And suddenly we have a DCU Justice League book where a Legion of Doom seems like an idea whose time has finally come. God help us.

Can’t deny it though. There’s something deliciously whack about wondering what sequence of events would convince the Joker to join a team that includes Gorilla Grodd, Sinestro, and Lex Luthor. Presumably, power. If not also mayhem. But that sort of thing never seems to work well for the bad guys when they get together. Except that now, you gotta wonder.

Obviously Luthor’s been doing a lot of his own wondering. And presumably a lot of planning. What that backstory is exactly, we’re sure to get more of as Snyder rolls out more of his tale. Given all the ‘weapons from the future, in the attic’ however, I’m going to assume that it involves some time travel. Which is a subject worthy of another column, so I’ll just table that for now.

In the meantime, it’s pretty clear ol’ Lexy has gone full round the bend into his trademark psychopathic, xenophobic, megalomania. We always knew he would, and again, it’s damn satisfying to see it in bold relief. You can’t help at the same time though but come away with the distinct impression that whatever set off Luthor’s current lust for villainy, must be pretty damned disturbing. And irresistible. Seems the rest the of his new Legion is in on that story. At least, as much as Luthor feels ready to cut them in on, anyway.

All the rest of us though, are gonna have to wait.

Evidently it all has to do with that great, mysterious, mega-powerful, possibly-sentient streak of… whatever, that’s been sent hurtling through space and time from the broken hemorrhage of the universal Source Wall. Uh-huh. The one that just landed on Earth, into the waiting arms of Lex and the Legion. What that all means for the League of course, is bad news. How bad remains to be seen.

But at a guess?

Now, look. The broad strokes of this are a lot of fun. And personally, I think it’s going to work. We’ll see how it goes. Again, as much as I cringe at the truth of it, I do think this an idea whose time has come. So much so in fact, that I don’t think it really needs too much justification.

I’m not sure if maybe Scott Snyder fully believe that himself however. Or maybe he’s just being too damn clever for his own good. Regardless, there’s a lot of language in the script that seems wholly tasked with making the case for this new over-arching dichotomy for the DCU. I’m not entirely sure that’s all really necessary however. Maybe. Again, I guess we’ll see. But all this cryptic, often convoluted language about justice and doom, can feel a bit heavy handed, and more complicated than I think the average reader wants to see. It’s as if, in order to get to this place, where a definitive shift seems to be the desired outcome, Snyder doesn’t want to rely on the simple power of the idea itself and is instead busy trying to cram square narrative pegs into round narrative holes.

Just as one example, it’s just not clear to me how the League choosing to reaffirm the ideals of justice they stand for somehow itself ‘opens a doorway’ for a terrible new menace to arise. Come again? Are we being literal here? Or just clever? Because there’s certainly a lot of secret doorway symbolism going on here. Maybe it’s not exactly or literally what Snyder meant. But it sounded like that’s what he meant. And that’s just one example. There are others I find even harder to reconcile.

I wouldn’t make much of this, but frankly, in my opinion that sort of thing detracts from the power of what he’s pulling off otherwise. I’m willing to see how it plays out. It’s possible there’s a meta-narrative pay-off for all of Snyder’s verbal storytelling gymnastics – or even a purely practical one – that will become more evident as he continues. But if not, I really hope he gives that sort of thing up. Hell, even if it does, I hope he scales it back. It’s just a little too cryptic, or clever, or anyway distracting. Given how well he executes so much else in his scripting, it’s a little hard to get past how over-complicated he seems to be making something that, at its core, comes down to some pretty simple, clear bold lines.

The Legion of Doom is back again, baby – for the very first time. Time to level it up, Justice League. We’re all counting on you. ‘Cause there’s only so many things we can afford to see break if you really expect to be able to fix them all again.