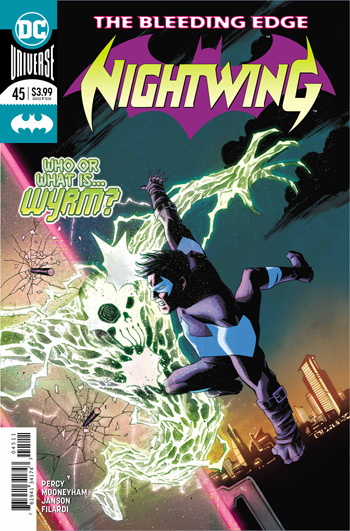 Man, what a difference a writer makes.

Benjamin Percy has taken this title, which I had personally stopped reading, and turned it around into some damn fine entertainment.

This is the second issue in his run and it’s just as good as the first.

The issue starts up fantastically as Dick wakes up next to Barbara Gordon!

What happened the night before? Barbara says they drank too much wine.

But what happened between them?  Percy makes them both real people so it’s quite fun to see both of their reactions.

Dick then is hot on the trail of a string of murders. They don’t seem at have any relationship to each other. But things start to take Dick to the digital underworld.

This leads to a hell of a question: How can Nightwing defeat a foe who he cannot physically fight?

Dick then gets to talk to Barbara about what happened the night before. And this conversation leads Dick to the villain known as Wyrm. He’s a digital type of villain and he leads the comic to a gross ending. Still, I didn’t mind and it’s well handled.

The art for this book by Mooneyham is pretty good as well. He is accompanied by the legendary Klaus Janson on inks in the first 15 pages. It’s wonderful. He and Percy make a great team. They’ve even kickstarted my interest in the book completely.