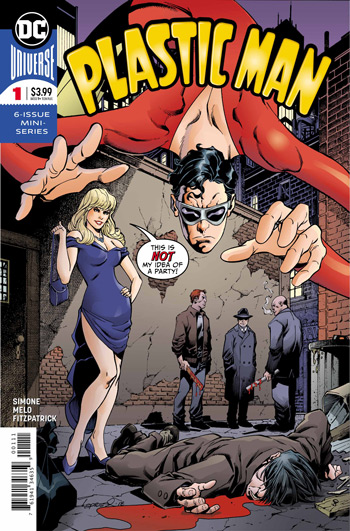 Gail Simone and Adriana Melo reunite to bring Plastic Man back to the fore in a new miniseries, revisiting his origins while pointing him in a new direction.

Here, Plas is trying to piece together his memories, reconciling his superheroic identity with his criminal alter-ego, Eel O’Brian.

Complicating things is Obscura, a Spyral agent who requests his help in infiltrating a villainous cabal that may have infiltrated a number of superteams.

Simone is flexing old muscles here, as her take on Plastic Man feels like a slightly more laid back Deadpool. He’s about as manic as he is elastic, though weighed down somewhat by his criminal past.

Together, Simone and Melo create an enjoyable enough start to the story, and the last two pages set up an interesting path for his story to take.

Still, here’s hoping the new Plastic Man gets a little more colorful as it goes along.