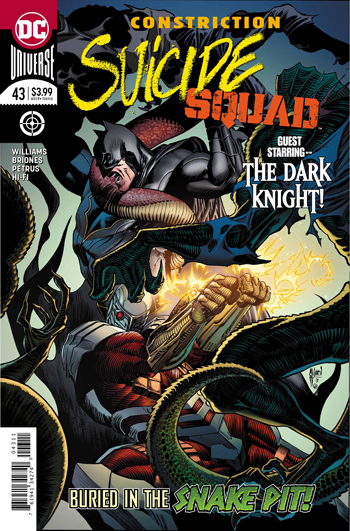 This issue opens with Deadshot and Batman in a car going up against a big large snake mutant.

You have to laugh a bit at the concepts Rob Williams comes up with. Then, they are flanked by some Kobra soldiers! That leaves Batman to fight the big snake mutant thing.

At that point I said “oh, why not?” and enjoyed the silly yet entertaining ride.

Then, after that fight, Deadshot antagonizes Batman. And they fight. It’s a hell of a fight too for two guys who were working together up until now.

It feels a little forced but again, why not?

The adrenaline is high and at least it’s not boring.

After these two fight, the rest of the Suicide Squad shows up to stop these two. And another fight ensues! Batman and Deadshot are just trying to get to Floyd Lawton’s daughter. But Kobra’s high command is turning her into the deadliest Kobra agent of all.

And it looks like she’s getting ready to fight her father and maybe everyone else who happens to show up in this book.

That’s pretty much the whole issue. It ends on a cliffhanger. And it’s nuts. But again, why not? Williams keeps the adrenaline high throughout and there’s sort of a perverse enjoyment in reading this book.

The artwork flows from that two artists on this issue. Everyone is nuts but at least it’s readable and clean. I look forward to this title now. I never know what to expect issue to issue. But I always know that it will be completely bananas.