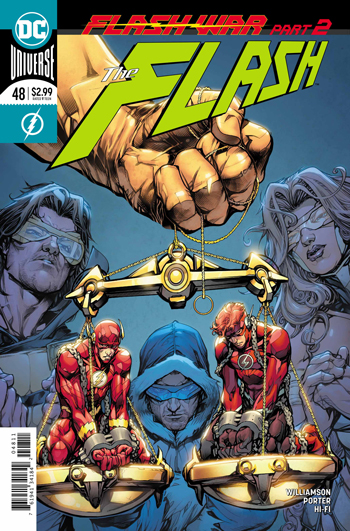 “Don’t listen to him Wally!
We’ve never needed a Reverse-Flash to tell us how to be heroes!”

At the outset of the Flash War, prior to the events of the last two issues, I wondered what could possibly set Barry Allen and the original Wally West so at odds they would go to ‘war’, all-out war, with one another.

According to Hunter Solomon, aka Zoom, aka Wally’s personal (now, 25th century) Reverse Flash, Jai and Iris (and maybe Max Mecury, and Impulse too, for anyone paying attention) are all still stuck within the Speed Force.

Wally can get them back, says Zoom, but only if he’s willing to risk destroying the Speed Force itself, by somehow breaking into it at just the right point of incursion and snatching the twins from their state of supposedly real, in-betweenness.

If that seems extraordinarily unlikely to you, you’d probably be right. (Probably.) So, what convinces Wally that Zoom isn’t simply manipulating the heck out of him (he is), and that he should actually attempt this hare-brained stunt without further consideration or consultation with his one-time mentor?

Well, the love of his kids obviously. That and his famously red-headed, hot-headed nature.

That seems to be enough for writer Joshua Williamson, and to his credit, he doesn’t waste a lot of time trying to justify it further. Wally knows this is a less than wonderful idea. But it’s a risk he has to take, he decides. And no one – certainly not Barry Allen, who’s been riding his butt, and by the way, not stepping up to help him out in this hour of need – no one, is going to get in Wally’s way.

This issue, and the last, have mostly served as a bridge to get them to that point. And now that we, and all the characters of our cast, are up to speed, well, I guess it’s time to break it.

Now I don’t think for a moment that Wally plans to do that. Even with all his over-emotional pronouncements, Williamson is clear to indicate that Wally knows full well the seriousness of what Zoom is suggesting, along with no small amount of distrust of Zoom himself.

But in keeping with the sort of tensions you would expect to see rise to the boiling point between two super-speedsters, it certainly looks as if reality itself is in the hands of a couple of impetuous, hot-headed dummies. Just don’t break the universe guys. Again.

In all of this I find myself wondering about Linda Park.

Linda who does not recall anything of her other-universal life with Wally, or therefore their children – despite the fact that it takes only a dedicated effort on Wally’s part to get both Barry and his Aunt Iris to remember exactly who he is. Or was.

It begs the question of whether the same could happen for Linda… given enough stimulation. Maybe that’s something for Wally to think about.

Provided he doesn’t break the universe. Again. Or die. After all, the promos of this story arc proudly insist that after this there will be only one Flash.

There’s actually a great resolution to all of this, and I hope I’m right. I won’t go into any detail on my thinking, other than to say that all the elements of a solution, should Barry and Wally find their way to it, are already right before us, and them.

It’s a solution that could even allow for Wally to reclaim a life with Linda, Jai and Iris.

Seems to me, that was always just a matter of time really.

What happens along the race to that point remains to be seen though. It sure would be fun to see a little inter-dimensional time-travel though. Long as Barry and Wally don’t break the universe in the process.

In this article:Book/Comic Review, Comic Books/Strips, DC Comics, The Flash