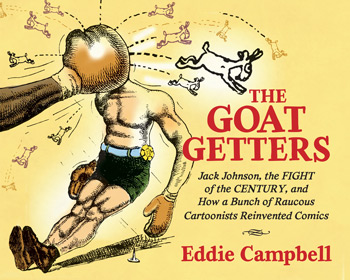 Written and Illustrated by Eddie Campbell
Published by The Library of American Comics /
IDW Publishing
Released 5/1/18 / $49.99

I guess I’m just not the audience for The Goat Getters by the great writer/artist Eddie Campbell.

But then, I’m not sure exactly who would be, either.

It’s actually about the origins of the expression “getting one’s goat.”

That’s in there, but…It’s about sports cartooning in general and boxer Jack Johnson in particular…only not so much, really. So…yeah.

At more than 300 pages, I feel like it overanalyzes its subject (subjects?) too much, á la the recent, purposely uber-deconstructing, Eisner-nominated, How to Read Nancy. The difference is that in this case, it’s pretty much all deeply serious stuff.

Overall The Goat Getters reminds me of the semi-scholarly articles in the late, lamented comic strip history magazine, Nemo. Almost every issue was loaded down with turn-of-the-century minutiae I felt I should know as a comics enthusiast but it wasn’t always stuff I actually cared about.

In this volume, there’s no shortage of interesting stuff including a nice selection of rare cartoon art from old-timers like George Herriman, Tad Dorgan, Jimmy Swinnerton, George McManus, Robert Ripley, and Rube Goldberg. Unless you’re a boxing lover who already has at least some grasp of the history of the era, however, it isn’t particularly interesting art.

The often highly detailed text helps, of course, but at times gets too over-informative unless, again, you’re a boxing aficionado.

Clearly a labor of love, there is no doubt that The Goat Getters is a well-done book, and no doubt that there are some folks out there who will appreciate it. I guess it just really gets my goat that I’m not one of them.