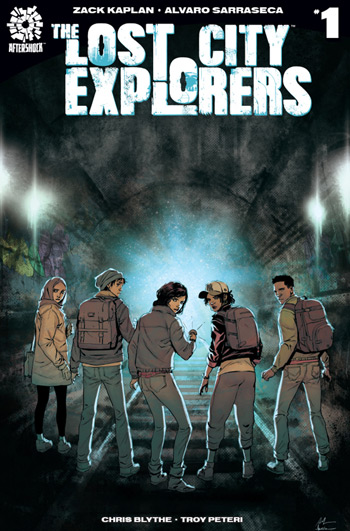 This is the start of a new series at AfterShock. They are really putting out some really excellent books. So I was hopeful going into this one.

Sadly, it was just okay. There’s a few problems with it and I hope they are fixed so it can get better.

This is a mystery comic book that has a mystery that doesn’t really hook you right away. It focuses on a group of millennial teenagers who find just where the Lost City of Atlantis is.

And it’s underneath New York City!

The first issue sets this up. And there’s a lot of setup. So much so, we don’t really get much in the way of action. I understand wanting to build your characters, but it’s slow to start.

The only action that happens in the entire issue is in the first four pages, but even then it’s not very exciting.

It also doesn’t help that the characters themselves aren’t very good. It feels like Kaplan has watched Stranger Things and The Goonies a lot and modeled his characters after that. He feels like he is trying for a gritty take on that genre but it doesn’t really work. Or, at least not yet.

The art also suffers from a lack of style. AfterShock’s best books have a style to them that feels raw and passionate. This feels quaint and mannered.

The ending gets the plot completely set up. So who knows? This could really pick up. But as far for right now, this story of finding Atlantis feels like it’s sinking.