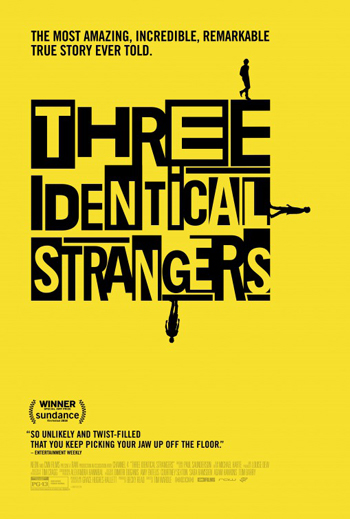 Three Identical Strangers is the fascinating, stranger-than-fiction story of three men who found out at the age of 19 that they were triplets who’d been separated at birth and adopted to different families in the New York area.

Tim Wardle’s brilliant documentary, which won a Special Jury Prize at Sundance, ranks with the best of Errol Morris’s work.

It begins with one small story and slowly expands to something undreamt of.

In the film, we first meet 56-year-old Robert “Bobby” Shafran.

Bobby recounts the day he first arrived at college and was enthusiastically greeted as “Eddy,” by everyone who seemed to already know him. He shook it off as a strange coincidence — until a guy named Michael asked him if he was adopted. And if his birthday was July 12, 1961.

Immediately, Michael and Bobby drove to Eddy’s house, where the two realized they were identical twins. (Happily, there are photos of this remarkable moment.)

The feel-good story made headlines — and that’s when David Kellman saw the papers and realized he was the third missing brother, which only made it an even better story.

The reunited triplets became a media sensation, appearing on every talk show and in every magazine. They even scored a cameo opposite Madonna in “Desperately Seeking Susan.” They were celebrities. Everyone loved this youthful, good-natured trio, who were overjoyed at having found each other, and to realize how much they had in common.

In finding how similar they were — they all smoked, they all liked older women — the twins proved that nature seemed to have won out over nurture. The opened a popular restaurant called “Triplets.” Life was good.

And that’s where the story probably ended for anyone who read about them in People magazine in the ’80s. Except the rest of the story gets darker. A whole hell of a lot darker. You can read about their lives before you go see the film, but I’d recommend seeing it cold, like I did.

The brothers resisted telling their full story before now and it’s easy to see why. Wardle, who’s known the family for years, earned their trust and the result is this powerful film.

He digs deep into the mystery surrounding their adoption and unearths information no one else had been able to uncover so far.

It ends up being a tale of abuse and cover-ups that rivals Errol Morris’s masterful Wormwood, about a man’s lifelong search for the truth behind his father’s mysterious death in the ’50s. Like Morris, Wardle gets people to reveal far more than they realize on camera. It’s a savage piece of work.