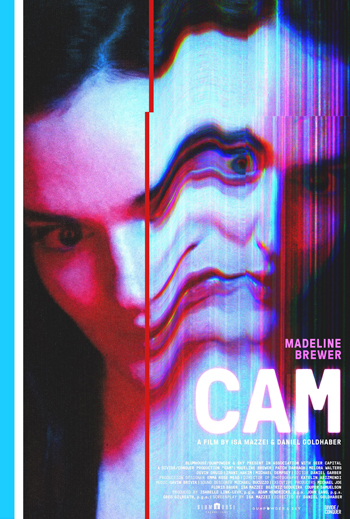 The internet; it’s a blessing and curse.

Offering endless freedom, a platform to express the true self, providing hours of fun and entertainment.

However, like all good things, it has a dark side. One the greatest fears the internet holds is the ability to steal unsuspected victims identities.

Bur for many of those in the Adult Entertainment industry the internet is not only a form of entertainment but it provides a living.

Lola (Madeline Brewer) is one of these girls in the sex industry who follows a very strict set of rules to avoid falling into the trappings of the dark side of the internet.

Armed with her boundaries, she keeps her performance work tightly sandboxed from her personal life, as it must be. However, one day, Alice finds herself unable to log into her account because someone is already on, using her profile. She hits the site as a guest and discovers that somehow, against all reason, she’s been replaced on her page with an exact duplicate of herself, inexplicably camming from her very home. A duplicate that knows personal things only she could know. And is extremely less guarded about any issues of privacy. Lola watches as her life begins to spiral causing her to break several of her rules for her to get her life back for once and for all.

CAM is everyone’s worst nightmare which questions what happens when the online personalities we shape take on their own lives. Under the daily stress of cracking the Top 50 of Camgirls, she develops a steady flow of followers and daily worshipers. However, life is hard for Lola as she has to think of new and creative ways to keep her audience attention without giving them what they really want: a live nude show which breaks one of her very strict rules. Constantly competing with the other girls on the website, she turns to shocking and violent sight-gags to keep her base happy.

Unfortunately, happiness is short-lived and the pressures of appeasing her fans and reaching to the top spot is anxiety-filled effort that the audience feels relentlessly.

Director Daniel Goldhaber turns CAM into a claustrophobic nightmare, making excellent usage of close tight spaces, neon lights and the constant paranoia of losing it all sides. Brewer as Lola is captivating, giving herself fully to the role. Playing essentially two roles as Alice, the sweet daughter and caring sister and Lola, her online persona, Brewer is able to carefully balance both lives with care and authenticity. Her emotions are raw and allows the audience to feel what it’s like to watch her life go spiraling out of control. Then there are the tender moments she shares with er family, where there’s a sort of easy, familiarity and heart she brings to the role.

However, there’s always the desperation of finding out what happened to her identity and who is the girl pretending to be her online. Her quietness is transformed into a woman who is self-assured, abrasive and authoritative.

Written by former sex worker, Issa Mazzei, CAM is a smart and authentic look into the sex industry. Never demeaning Lola’s profession, Mazzei helps the audience understand what it entail to be a camgirl (it’s not always about sex), while bringing a pulse-pounding life to the ways in which workers develop an enhanced awareness of the perception of others, an invaluable skill for performance – and self-preservation – that can take a significant toll. Her writing takes the audience on unexpected twists and turns as the stakes become higher. Never wasting a single page on mundane conversation, the story moves quickly without skipping a beat.

CAM is a stunningly gripping experience, that’s not your average horror movie. Filled with layers, each character (no matter their screen time) is richly developed and vibrant onscreen. While the ending is a tad muddled, the storytelling is rare for a horror movie and definitely not one to miss.