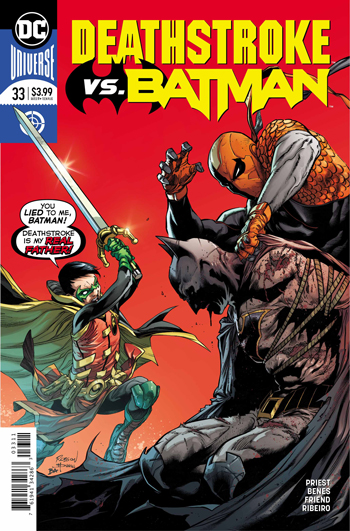 The cover hooked me immediately. It has the Damian Wayne Robin wielding a sword and telling a fallen Batman that he was lied to. He tells him that Deathstroke is his real father. Deathstroke is in back of Batman creeping around. That image is completely awesome. (The alternative cover is equally awesome with Robin wearing a new combo with the Deathstroke mask.)

Incidentally, the interior of the book is fantastic as well. Priest has been killing it on this book and every page is a new delight!

The opening sequence is Bruce and Damian in disguise on a car trip. The dialogue between the two is laugh out loud funny. Damian won’t stop calling Bruce “Father” and Bruce just loses it. It’s a nice scene that is a riot.

After that,  Robin confronts Deathstroke. They have a lot of back and forth. They also come across the villain known as Nightshade. Deathstroke has to perform a hit on her and Robin is next to him, basically job shadowing him.  The ensuing battle is wacky and it has great and hilarious dialogue. It’s good.

Watching Deathstroke screw with Damian’s head (or is he?) is a blast. The question still hasn’t been answered yet if Slade is Damian’s father.  Priest holds the answer close to his chest.

It’s also great to see Ed Benes drawing this title and in the DC Universe again. He has a look to his art that is perfectly suited for the craziness and action of this book. This is another great chapter in the mini Batman versus Deathstroke saga!