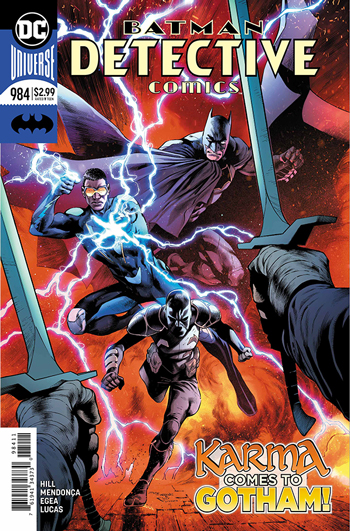 In just two issues (this being his second) writer Bryan Hill has breathed new life into this title. He’s brought it back to basics. In this case, the “basics” here is  just telling a good story. I’ve enjoyed this issue as much as I had the previous one.

Batman has a bunch of new protégés!

This issue shows us a little more about how this is going to work. It’s very entertaining how Hill shows us  another side of Batman.

He does a nice job of setting this up and making it easy for that reader to digest.

The opening scene has Cassandra Cain on the run from the new villain named Karma. The book goes back and forth from this scene from Batman getting Black Lightning to teach his disciples.

Then, just when it looks like Karma is going to win, the two storylines combine and Black Lightning and Batman show up!

The ensuing fight is fantastic.

Hill writes an amazingly fast, yet emotional story. By the time we get to the end, we feel for these characters. Bruce’s anguish on the last page is something the reader can really feel. He writes a great Batman.

I love how Hill handles Black Lightning here too. He fits right in perfectly and it makes total sense why Bruce wants him teaching.

I have to mention the art by Mendonca as well. He has been killing it lately. The action scenes are superbly choreographed and drawn. He also makes the quieter moments sing as well. It’s great.

nnHill has turned this book around. It was getting silly before he came on. Now, the book feels like it has a direction. I’m excited about the possibilities that may be ahead of us.