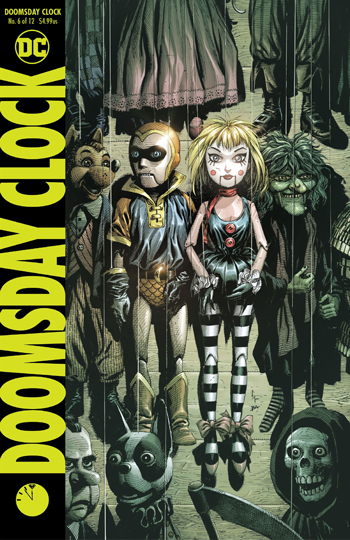 Where are we going with this?

We’re halfway through Doomsday Clock and as much as we’ve seen things happen, we haven’t really gotten much plot progression. We have characters slowly revealing their origins and more DCU characters making their first appearances, plus a lot of action and violence.

However, it feels like we’re in a prolonged first act.

Writer Geoff Johns is still parceling out details very carefully. Dr. Manhattan has only been mentioned a few times so far in the series. Ozymandias and Rorschach haven’t done a whole lot thus far, outside of the Rorschach flashback issue. The Comedian is alive and well, running around for reasons we still don’t know.

The Marionette and Mime take center stage in this issue, as it darts back and forth between their childhood origins and the present day, as they follow the Joker to a meeting of supervillains organized by the Riddler. Joker has Batman chained up in a wheelchair, following last issue’s run-in during a riot in Gotham, stemming from protests against metahumans, thanks to the “Superman theory,” positing most of the world’s heroes and villains are really government agents.

It’s true for Typhoon and Moonbow, who’ve infiltrated the meeting, but that doesn’t protect them from the Comedian, who shoots Typhoon in the face. (The tremendously gory panel is lovingly illustrated by Gary Frank, who is otherwise turning in career work.) All hell breaks loose, as do Marionette and Mime in the confusion.

In the past, Marionette is revealed to be a young girl named Erika whose father, a puppet-maker, is an unwilling party to police racketeering. The Mime, as it happens, is a mute preteen boy named Marcos who befriends the girl. When Erika’s father kills himself, Erika snaps and attacks the cops, along with Marcos. This sets them on their path, one which continues on until Erika miscarries Marcos’ baby.

Back in the present day, Comedian tracks them down and is about to kill them when the Joker attacks him from behind, incapaciting him. Marionette and Mime decide to join him, thinking he could at least help them locate the missing Dr. Manhattan.

Johns’ script loops around, hitting plot details while releasing character information, while Gary Frank continues doing excellent work. Doomsday Clock #6 is a fun ride in the moment, but midway through the run, I’m still wondering when we get to the fireworks factory.