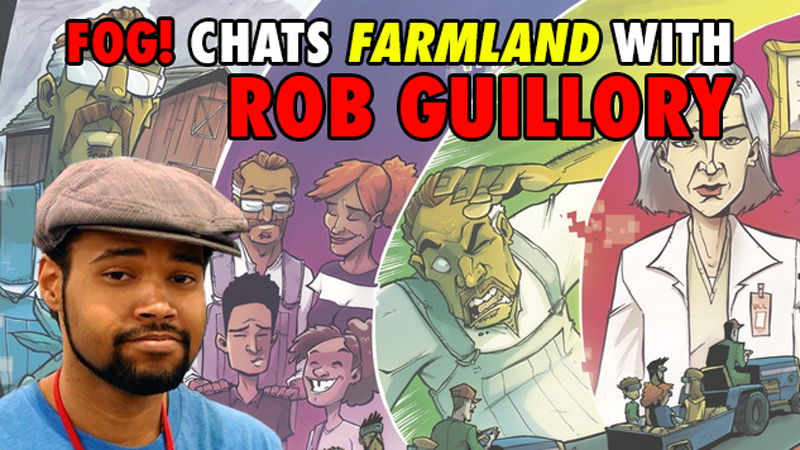 They say the apple never falls far from the tree, but what if instead of a piece of wholesome fruit it’s a bioengineered replacement limb?

That’s part of the premise to Rob Guillory’s new Image comics series, Farmhand. This dark comedy follows estranged son and writer Ekekial Jenkins as he returns to his roots at the Jenkins Family Farm, run by homey but mysterious patriarch Jedidiah Jenkins.

With the first issue in stores this week, I was able to speak to creator Rob Guillory about what it means to hold all the creative roles, quirky family dynamics, and the importance of close reading (Hint: Easter eggs aplenty).

FOG!: Most recently, readers know you for your work on Chew. Aside from some very familiar looking chickens in the opening pages, what influence did that run have on developing and producing Farmhand?

Rob Guillory: Oh, I definitely learned a ton about story structure while working on Chew. Particularly, when it came to plotting a long story. So with Farmhand, I began thinking big picture in terms of the story almost immediately. I wanted to work toward a set ending, much as we did on Chew, so that’s been informing a lot of my story decisions. I’m still leaving room for some improvisation, but there’s a deliberate plan in motion on this book.

Rather than this being your first go, Farmhand is a return to writing for you. What are some of the challenges in taking on both the writing and the illustrating? Do you prefer having both roles?

Other than the obvious issue of the increased workload, the hardest part is not having that creative collaborator to bounce things off of. This story and the decisions made while telling it ultimately begin and end with me. And while I’ve got a few trusted peers that I occasionally go to for creative counsel, it’s a completely different beast than working with a separate writer. I really enjoy the autonomy of being a writer/artist, but it can be as daunting as it is liberating.

As you’ve noted that the story is very near and dear to you, I have to ask what part hits closest to home – the tense relationship with a parent? Agrarian upbringing? Farming of human organs?

Yeah, the relational elements are all very familiar to me, either as dynamics I’ve experienced myself or have experienced in the lives of people around me. I’ve always been a people watcher, and from a very young age, I’ve always been fascinated and frustrated by the decisions we make as humans. That’s very central to Farmhand. It’s the idea that sometimes humans make very bad decisions with the very best intentions, only for those decisions to ripple down through the generations in unexpected ways. I know all about that story.

For all of the sci-fi elements woven throughout the inaugural issue, the story is remarkably grounded. How did you strike the balance between reality and, to borrow your own words, “WTF science”?

Well, from the start I knew I needed to ground such a weird premise in something readers were familiar with or this story would be completely unrelatable. And what’s more universal than family drama? We’ve all experienced familial strife to some degree, so it made sense to lean into that here. When I approach writing this book, I always start by thinking about where the characters’ relationships are right now and where they will be going. I know the general arc of each relationship, but I also know the story arc of the “weird science” aspect of the book.

So I generally used weirder elements to add pressure to these relationships, but also to act as a metaphor for the Jenkins family as a whole. It’s sort of a symbiotic relationship between the two elements. I look at the Jedidiah Seed and its effects as sort of a separate, yet connected entity that is tormenting the family, and each issue is the story of how the Jenkins react and cope with it. 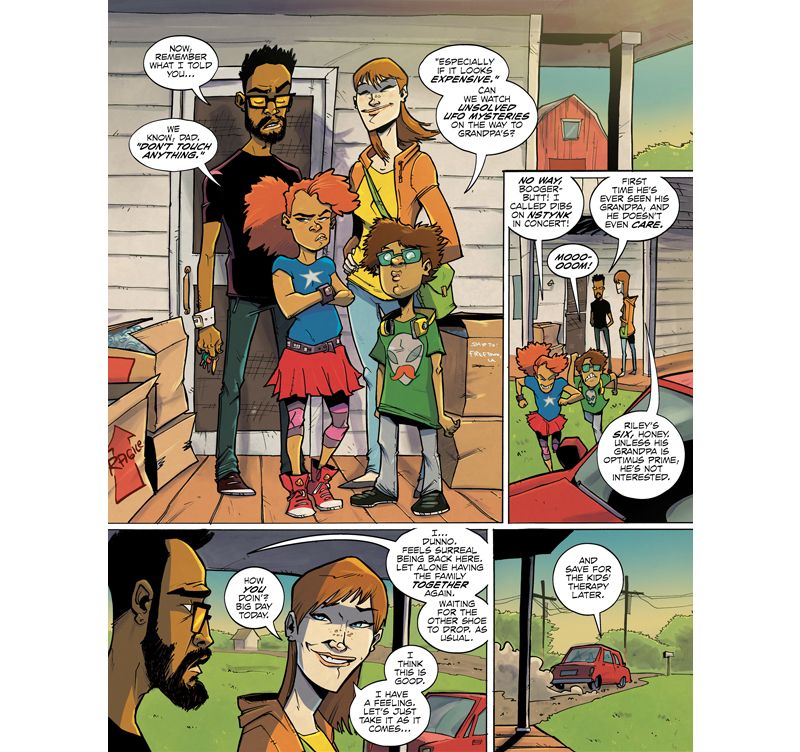 Jedidiah and Ezekial are names I’ve grown up with, not just from my Southern relatives but from sitting in the front church pew as a kid. Does the name choice indicate a clue for future storylines? Do you think playing God ever really works out?

Absolutely. “Jedidiah” is the name God gave to Solomon, who many regard as the wisest man who ever lived. It made sense to me to give it to Jedidiah Jenkins, as he’s the character who many of the characters look to as a type of Solomon. He’s the creator of this new technology, so everyone looks to him as the possessor of all wisdom. But he’s just a man, and nothing good ever happens when a man starts looking at himself as a god.

You are known for having excellent Easter eggs that make readers scour each page several times over. What do these background touches add to your ability to relate to the audience?

I think the Easter eggs are a way for me to lean over to readers and sort of rib them a bit, without undermining the story. They flesh out the world a bit more, while still letting me whisper to the audience “Hey, this is some crazy crap, right?” I look at them sort of like stand-up comedy. In stand-up, half the comedy comes from the comedian’s reactions to the jokes he’s telling. It lets me sit next to the reader and enjoy it with them.

What are you most excited about in the next few issues? Anything that we should pay especially close attention to?

I’m just excited to start digging into who these characters are. I’m absolutely in love with this cast, and I’m hoping readers enjoy them as much as I do. Story-wise though, I think readers need to pay attention to every panel. I always try to make each issue an experience that just gets richer in multiple reads, so I encourage readers to slow down and study this book. There’s a lot there. 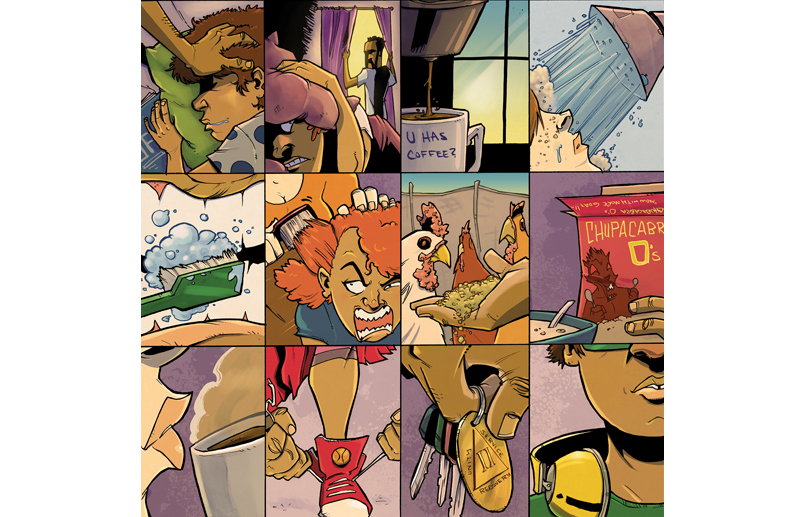 What’s the best way for fans to keep track of you? 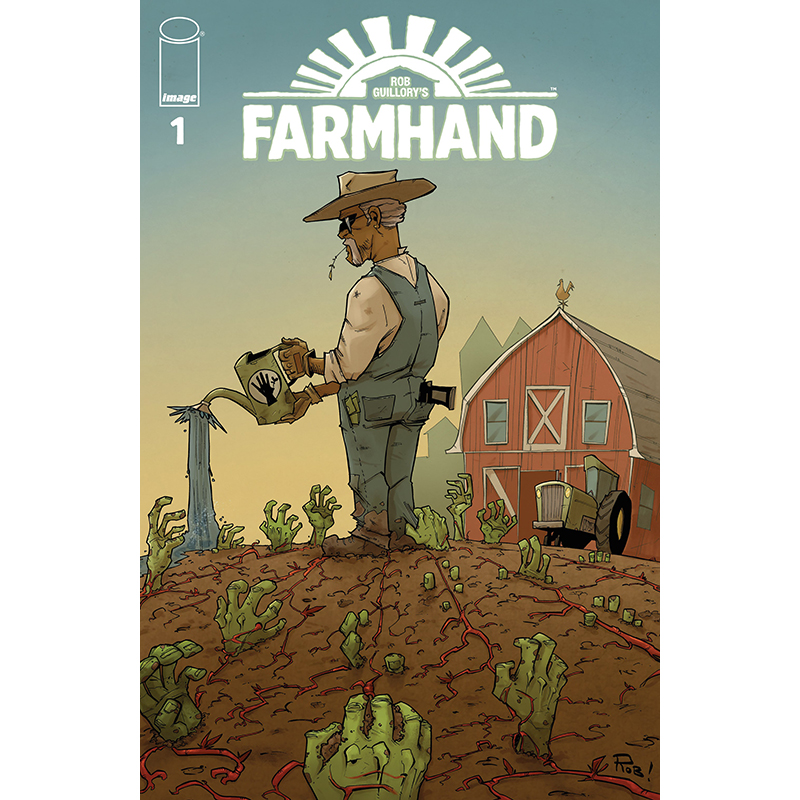 Farmhand #1 is now available in comic stores and via digital.