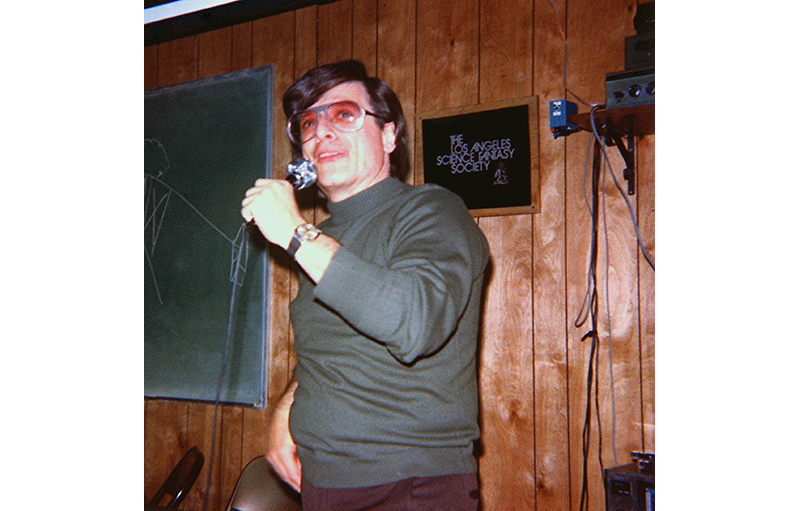 Harlan Ellison was a prick. That is not subjective. He was married five times.

His cantankerous nature is the stuff of infamy. Ellison was without a doubt one of the most brilliant madmen who ever lived. If you’re not familiar with Harlan Ellison he was first and foremost a writer. Ellison preferred the term writer over any other moniker for his craft, many of which included: Novelist, Columnist, Editor, Essayist, Screenwriter, Short Story/ Horror /Science Fiction/Fantasy Author, Television Creator, Smut Peddler, Actor, and Professional Liar.

Terms like legend get bandied about all the time. Whenever someone dies, “legend” pops up like a bent jack-in-the-box for a lazy writer to use. Sadly it’s been used a lot recently with a wide array of diverse writers leaving us from Philip Roth, and Tom Wolfe, to Sam Shepherd- for the record, they all deserved it too. But Harlan Ellison took it to another level by not only being a legend, but by being legendary.

Harlan Ellison died in his sleep on Thursday, June 28th in Los Angeles California. He was 84 years old. Harlan Ellison will be forever survived by his work, and the unapologetic attitude fueling that brilliant work.

Harlan Ellison hailed from Painesville Ohio, outside Cleveland, as the son of a jeweler father and dentist mother. His early life is so fantastical it almost seems fake. But to hear Ellison tell tales of tuna fishing off the Galveston coast, picking crops in New Orleans, driving trucks in North Carolina, being a short order cook, cab driver, door-to-door brush salesman, and hired gun for a “wealthy neurotic”, you’d believe every word. All of these jobs Harlan undertook occurred on one of his many journeys that began by running away from home.

Ellison started running away from home as young as thirteen. At only five foot-five inches, he was the favorite punching bag to the vicious anti-Semitic neighborhood kids. As Painesville’s only Jewish family, Ellison not only didn’t have any other Jewish friends, he had no friends at all. Ellison, reluctantly, credited this tough childhood with making him a great writer. It also introduced him to one of his favorite themes; violence.

One must only look at the tough depictions of neighborhood gangs in Ellison’s first novel Rumble (later published as Web of Fear) to see his unflinching and disturbing style at work.

There is no better example of this than Harlan’s now infamous poolroom encounter with Frank Sinatra in 1965.

Sinatra traded verbal barbs with the master wordsmith, who didn’t seem to care he was talking to the famous crooner. To get a better picture of what exactly went down that night, seek out the Gay Talese famous Esquire profile from April 1966 entitled “Frank Sinatra Has a Cold.” Talese determined the encounter would live in Ellison’s memory the rest of his life, where Sinatra would most likely forget five minutes later. I disagree. Sinatra wasn’t used to people disrespecting him, especially in a crowd. Chances are Sinatra never forgot the little guy in boots who had the audacity to stand his ground.

The reaction to the encounter wasn’t favorable to Ellison, as many people were offended he didn’t appease Sinatra’s ego. Ellison didn’t care. After all, Ellison was the guy who was famously fired by Disney on his first day. Apparently he was overheard joking about making some of the iconic characters do pornographic things. If Ellison didn’t care about offending The Mouse, he was a hard man to humble.

Ellison didn’t seek out fans by appealing to things they wanted to hear, he appealed to them by telling them exactly the opposite. Nothing displayed this better than his many talk show appearances. One particular appearance, on Merv Griffin in 1977, alongside the original Dumbledore, Richard Harris, was especially incendiary.

In the span of six minutes, Ellison embraced elitism, eviscerated astrology, and proclaimed there is no God.

What’s worse, he all but called Merv a fool for thinking otherwise. Ellison kept his cool on the couch, with his trademark pipe, and tinted glasses.

ELLISON: Well, I’m against anything that keeps people stupid.

His radical bluntness didn’t merely earn him hate mail, or a nasty tweet from a thousand miles away, Ellison actually had several attempts on his life. The attempts were serious, including two fire bombings, and believe it or not, a sniper, who lay in wait behind Ellison’s home. Ellison disarmed the sniper at gunpoint who turned out to be a disgruntled loser Ellison had cleaned out in a card game several years earlier.

Ellison’s legal issues are nearly as famous as his work. He sued James Cameron over The Terminator and won. In 1980, he sued the maker of the show Future Cop (along with Ben Bova) for infringing on their story Brillo, and won. He allegedly publicly assaulted author and critic Charles Platt at the Nebula Awards in 1985. Platt chose not to pursue legal action against Ellison, later signing a non-aggression pact to never discuss the incident again.

In suggesting Ellison’s works I could go on and on about how “Repent, Harlequin!” Said the Ticktockman is widely considered one of the greatest short stories ever, and is taught as such, in Universities all over the world, or how City on the Edge of Forever is widely considered the greatest episode of Star Trek ever written (although Ellison was famously unhappy with it), or how the Dangerous Visions collection series (collecting works from Asimov to Vonnegut – each with a unique introduction from Ellison as editor) is widely considered the gold standard for sci-fi/fantasy writing, or how his unaired script (introducing the character Two-Face) for the 60’s TV series Batman, considered too violent to film at the time, has recently been made into a brilliant comic book adaptation, or how you can spend hours watching video clips of Ellison discussing anything without ever getting bored; but I’d rather let Ellison’s works speak for itself. I hope you continue to discover it, as I still do, year after year.

There is a documentary on Ellison from 2007 called Dreams with Sharp Teeth, which includes interviews with him, Robin Williams, and Neil Gaiman among others. There is also a recent biography on his life entitled A Lit Fuse: The Provacative Life of Harlan Ellison by Nat Segaloff and David G. Grubbs. Ellison’s works have appeared on television, film, video games, audio books, anthologies, magazines, and graphic novels. Ellison’s won nearly every possible sci-fi/fantasy/horror literary award there is, multiple times, and has appeared as himself on both, The Simpsons (Married to the Blob 2014) and Scooby Doo! Mystery Incorporated in a recurring role.

The day after Harlan Ellison died I raced to one of my favorite used bookstores in Los Angeles to buy a signed copy of Web of Fear. I’d discovered it on a previous visit and was relieved to find it was still there.

When I was checking out, the woman behind the counter commented on the book. She told me Harlan would come in the store from time to time. I imagined what it would be like to run into him. Would he stalk his own section? Would he offer advice to a budding writer? Would he tell me the secret to great storytelling? My daydream was broken by her recollection, “He loved to prank call the store for some reason. He would ask “Do you have Prince Albert in a Can!?!” that sort of thing.” Guess I got my answer.

Ellison didn’t believe in heaven, but I like to think it’s full of writers. Rest in peace Harlan, rest anyway you want, and keep an eye out for Sinatra.