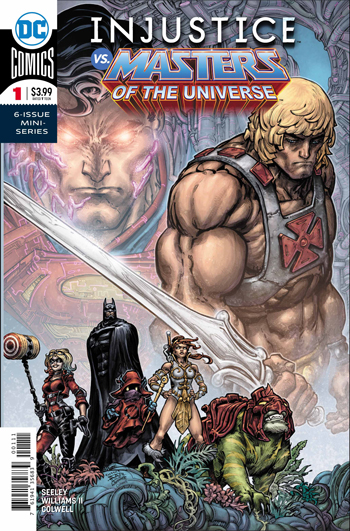 This issue starts out with a cool introduction of the Masters of the Universe! These characters as illustrated by Freddie Williams II are amazing to look at! He may be my favorite artist of one of my cherished childhood toy lines!

So we are introduced to the He-Man gang in the first few pages.

Then, one day, Batman and the Injustice gang shows up.

And then things get crazily nuts. I’m not sure that this comic book is necessary. But it does have some incidental pleasures.

The story goes like this: A robot thinks He-Man and his merry gang have been defeated. The robot takes control of Eternia.

But Prince Adam won’t have it and defeats the imposter!

I guess word eventually gets out because that’s when Batman and the gang show up.

It turns out that they want He-Man to help the Batman army to defeat the Superman army in the Injustice Universe! And then, off we go! We get crazy battles and even crazier dialogue. That’s the entire first issue right there.

I have pretty much written off Tim Seeley at this point. This book is fun yet incredibly goofy. The best part again is Williams on the art duties. His work makes me smile right along with the story making me cringe.
I took it in good fun. If you look at it like that, you may enjoy it a bit. I’ll read the rest of the series of course. But my brain will be shut off for the remainder of my time here for sure.

In this article:Book/Comic Review, Comic Books/Strips, Crossover, DC Comics, Masters of The Universe