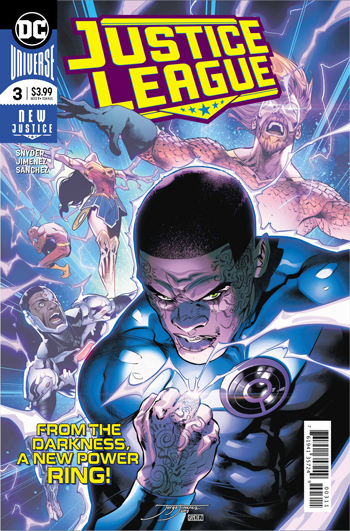 “No Superman. This is what the Totality requires from us! A leap of faith. A belief that there is something good at the heart of it.”

Scott Snyder sure does like to pile it on.

Justice League #3 is a masterful blend of building suspense and mystery, that once again leaves us with as many burning questions as it answers. Most prominent among them being, just what in the world happens now??

Nothing good it seems, no matter how earnestly J’onn J’onnz wants to believe otherwise.

But what that means exactly – just what the secret of the Totality actually is, what it’s origin, purpose and actual composition is – simply is not clear yet.

Something astonishing, and immensely powerful. Something ancient (by the current DCU standards anyway), something seemingly that Comes From Before. Something surprisingly innocent perhaps too. But also something vengeful and wrathful.

It’s an interesting combination certainly, and it suggests a world building psychology that potentially cuts to the core of what it is to be human in an all-too dangerous and chaotic universe. Which, given Mr. Snyder’s scope of concept lately, simply fuels the fire of curiosity. He’s building to something more than epic here. It simply isn’t clear exactly what yet.

Something at any rate that involves significant helpings of wonder and mystery so far. And yes, now, quite a LOT of entropy it seems. (Oy.) I’m waiting on the wisdom. One assumes it’s coming.

We can hope anyway.

Whatever all the answers are, for now it’s clear that it’s going to take more than faith to deal with them. And the knowledge that we, and the League, so desperately need to find our bearings is sorely lacking. With potentially disastrous results.

That is, unless, once again, you’re Lex Luthor. Who just seems to know everything about what’s transpiring, down to the minute, and even (as he calls it), the lunatic details that are needed for him to turn it all to his advantage. And all continues as planned. Luthor is enjoying himself like a chess master, 20 steps ahead, with an open view of the winning board.

We’re still at step 3 or 4. But it already looks like a game the League just can’t win.

Of course, this is deliberate, and as I say, it’s masterfully done. Even with all the brilliance and the synergy of Earth’s mighty pantheon of protectors (Thanks Geo Force! *phew*) ,even with all the astonishing capabilities they have to bring to bear against the infinite crises of the DCU, this is one crisis that will continue to catch them off guard, over and over again.

And so, yes, we get to watch the League move the ball down the field with remarkable speed and skill and determination, and yet what they find there is a waiting predatory danger, as well as a despairing global horror that fairly beggars belief.

To do this Snyder laces his script with bursts of brilliant imagination that range from (frankly) the nonsensical to the sublime. Again, not everything works, but there’s so much raw brilliance at play, I’m giving it all a pass for now. Jorge Jimenez’s pencils are an excellent complement to the grand scale of it all, and really the whole creative team is putting out a series they should be forever proud of.

Well presuming there’s any escaping from the all-consuming horrors of the invisible spectrum. It is a horror too. The heart of the ultraviolet light, it turns out, is a truly awful and devastating force – only the second of seven to arise presumably – one with a surprising history, and an even more surprising role to play in our current story.

Bad enough that we’re losing John Stewart to its grip. But what can he do? As he tells us, the normal emotional spectrum of the lantern corps are those which they control with their minds. Whereas the invisible spectrum and its ultraviolet light, is a force that controls us.

And I do mean us.

The scope of that, like all great comic storytelling, is a brilliant reflection of our current societal zeitgeist. John is a notable, if tragic, first recruit for a newly spawned ultraviolet corps. Here we have one of DC’s most noble and accomplished black superheroes, and he’s been claimed as an avatar of destruction and cruelty that draws on all the power of inner hatred and violence that lies within our own humanity. I’d take more issue with that, as a social commentary, if not for the last panel, which makes what happens to John looks like a drop in the bucket.

It’s looking dire folks. As dire as it’s ever been. Awakening dark forces of destruction are on the rise. It’s going to take every scrap of our strength, compassion, and idealism in the nobility of the human spirit, to bring us back into the light.