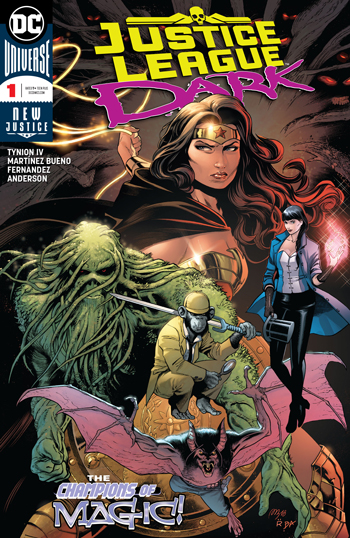 “We spent lifetimes alone, protected in the dark.
But the dark has begun to devour us. Which means we must act.
For once in our infernal lives, as one. In unison.
If we fail, all of magic will die.”

I’m happy to report that DC’s newest Justice League venture, Justice League Dark starts strong, with a first issue that is both well-crafted and enjoyable, and shows a lot of promise.

Writer Tynion IV launches into the storyline directly on the heels of the events of this May’s Justice League: No Justice.

Earth’s cosmically seeded Tree of Wonder has taken root in Salem, Massachusetts, and ever since magic around the world (and in-between too) has been… wrong.

Magic users of every kind have watched their usual workings erupt in horrors, with a tendency to leave them dead, bodies twisted from the inside out in spectacularly grotesque fashion. It’s made all magic dangerous to attempt, and no one it seems, is immune.

Wonder Woman, herself a being made from magic, has been trying to meet the crisis on the front lines. The Justice League has even given her the resources to forge her own team to address the danger. But no one is biting.

She’s too much ‘of the light’ apparently for any potential allies in the magical world. Whatever her intent, the workers of magic view her and her Justice League colleagues with suspicion, and she’s being met with a mean streak of isolationism wherever she turns.

Which is actually the only thing about the story so far that didn’t sell on me. The idea that the entire community of DC magic users either draw their powers from, or work within, ‘the dark’ to such an extent that a supposed agent of the light, a label that Diana herself sees as pretty silly, should be so universally shunned in a time of such crisis.

Really? Even Zauriel (who’s presence in this cast of characters I’m otherwise very pleased to see) and the Holy Host? Aren’t they actual agents of the Light? Hm.

Even Zatanna is prickly and resistant to the idea of outside interference, which is a little odd given her own history with the League. She comes around of course – eventually. But it takes a little more than Diana’s earnest appeals a strong sword arm, to finally convince her to throw her hat in with this new ‘Dark’ League.

Ah well. Whatever. It all works well enough, and it does create the right dynamics for a team that we can expect not to be operating quite in alignment with the rest of the magical DC order.

I’ll presume that’s a good thing – indeed, by the end of this issue, we’ve received more than a bit of a reason to believe so. Even if we also get the message that Diana’s team might be more trouble than they’re worth already.

It says a lot about Tynion’s storytelling chops that he succeeds in bringing together, through a well woven series of sharply scripted scenes, a collection of characters I had a hard time completely getting behind before reading this issue.

Zatanna’s presence makes the most sense of course, and Bobo the Detective Chimp was almost inevitable. He’s a magic-wielding monkey after all, no surprise there. Swamp Thing, Man-Bat for goodness sakes, and even Wonder Woman herself were more questionable to me, but by the end of this issue each of their presence in this odd assemblage makes more than enough sense to work. And there’s exciting hints of other players to come.

In fact, I’d say that the set-up potential in this first issue is palpable.

It helps that Alvaro Martinez Bueno’s pencils back up Tynion’s script so well. Bueno’s talent manages to capture the bizarre and horrific, as well as the very human, with a deceptively easy style that is simply beautiful. They’re a great team.

All around, this is a great lead-off to a book that promises to delve into every corner of DC’s universe of magic, and hopefully beyond, with a creative team that has a bit of their own magic going on with this project.

That’s damn satisfying. And helpful. I honestly wasn’t sure how I felt about this series going in, but after only one issue, I have to say I’ve got high hopes for the entire run.

(Just be careful what your hand comes out with.)

Next time: Inside Out, and Upside Down!