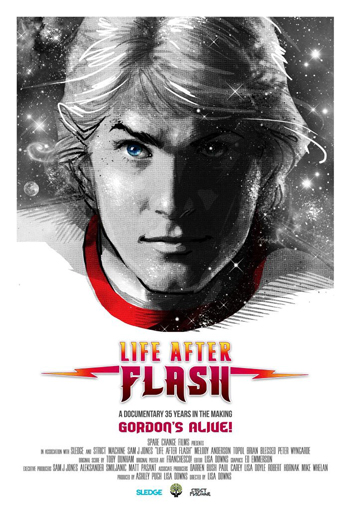 Lisa Downs’ documentary, Life After Flash is the film I’ve been waiting to see for almost forty years.

Unlike franchises like Star Wars, Star Trek or even the Alien series, there’s criminally very little out there for fans of the 1980 film, Flash Gordon.

One of the reasons, is that Flash Gordon, often feels like one of cinema’s red-headed step-children.

Many people are almost afraid to call themselves fans of the colorful campy adventure.

But for those who love the film, Life After Flash comes as both a celebration and vindication.

The film covers two story arcs: The behind the scenes and making of the film and the life and career of it’s star, Sam J. Jones.

Bringing together much of the film’s living cast members (the noticeable absences limited to Max von Sydow, Timothy Dalton and Ornella Muti), as well as many of the behind-the-scenes crew, the documentary covers producer Dino Di Laurentiis’ vision from inception to execution (virtually everyone who mentions the producer does their impression of him).  Despite the challenges he causes to both cast and crew, if it wasn’t for De Laurentiis’ foresight, the film would have likely been forgotten, if made at all).

Each cast and crew member share stories (including several prop collectors, filmmakers, actors and superfans), that at their core answer the question, Why is this movie special?

In no small part of the success is lead actor, Sam J. Jones, who won the part and who’s naiveté and ego while making the film nearly cost him everything.  Much of this is blamed on immaturity, but Jones is the first to take responsibility for his actions.  Interviews with close friends such as actors Patrick St. Esprit and Teri Copley as well as his third wife, Ramona Lynn Jones and his children reveal a complicated and dedicated family man.  As we learn more about Jones, he talks about his parents and the death of the brother he idolized.  After watching his career slip away, he starts a new career as a corporate bodyguard which renews his self-worth and eventually leads him toward the Hollywood comeback he wasn’t looking for with 2012’s Ted.

Jones appears to be a religious man, and his gratitude is palpable onscreen, not only for his career now (and his frequent convention appearances), but for his fans and for the opportunity that Flash Gordon gave him.

Lisa Downs has made a delightful film with Life After Flash that serves as a wonderful testament to both the film and the hero who played him.