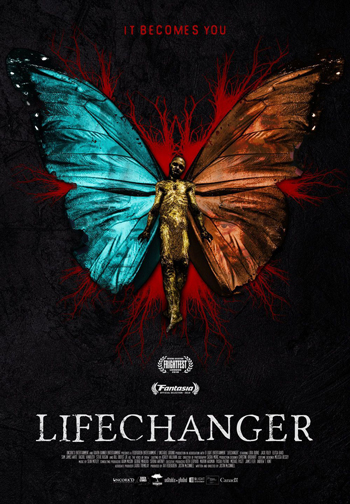 A humanoid creature of unknown origin (even to itself) must kill to survive, as it assumes the exact likeness of its victim, but starts to rot very quickly until a new body is needed.

As detailed in the creature’s voiceover, it understands that what it is doing is morally questionable, yet continues due partially to survival instinct, but also to try to rekindle a relationship with “his” wife, whom he walked away from years before.

Lifechanger certainly owes a debt to previous genre works, such as The Hidden, Under The Skin and Dan Simmons’ wonderful novel, Carrion Comfort (the film’s structure and circumstance have the feel of a vampire story, as well).

But writer/director Justin McConnell isn’t out to pay shallow homage to horror/sci-fi classics. He is using the premise to explore a creature’s attempts to be fully human by desperately attempting to be with the only person he’s ever loved, even if it means basically living a life as a serial killer to do so.

The most impressive aspect of Lifechanger is that while the lead character is played by multiple actors throughout the film, it always feels like the same being.  Some performances are better than others, but they’re all good, which is a credit to McConnell and his actors.

As the object of the creature’s affections, Lora Burke strikes just the right balance of deep sadness and positivity, and her many scenes with different incarnations of the creature are sharp and affecting.

I also enjoyed the way the film sucks us into its world by detailing the daily life of its protagonist rather matter-of-factly, despite some very grisly moments.

Unfortunately, I also felt this matter-of-fact approach ultimately worked against the film. I’m glad McConnell didn’t ape the super-stylized look and feel of, say, Under The Skin, but a little bit of crazy would have kicked this one up a notch.

As it stands it almost plays like a relationship/addiction drama with some horror elements.  Which is just fine, but I didn’t find this to be an especially satisfying way to tell the story of this creature.

That being said, I did like Lifechanger overall. I just felt it could have been truly special as opposed to merely worthwhile.

But worthwhile it is, and I do recommend Lifechanger for its many good moments and solid performances.