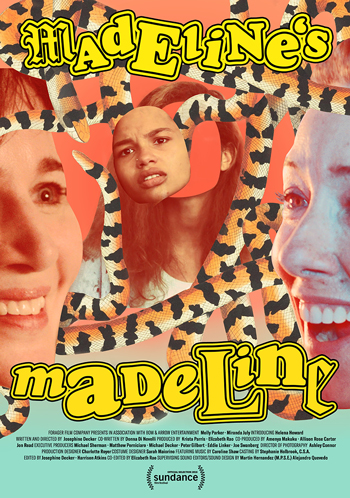 New York City is the heart and blood of the theater scene. People travel from all over the world to study the acting techniques of Lee Strasberg, Constantin Stanislavski, Stella Adler, Sanford Meisner and more in hopes of becoming the leading actor in someone’s Broadway production.

It’s also where we meet sixteen year old Madeline (Helena Howard) and her fragile yet overprotective mother Regina (Miranda July) living in Brooklyn, NY, who is studying to become an actress under the teachings of Evangeline (Molly Parker) whose theater troupe and acting exercises help draw Madeline’s inner talents and madness.

Switching between convoluted acting exercises such as the Meisner Technique (“you must become the turtle”) to Madeline’s relationship with her mother, the audience soon discovers she is living with mental illness which she is slowly losing her grip on. Soon she (and as a result) the audience starts to question reality. As Madeline continues to clash with her mother, she begins to form a bond with Evangeline but even their relationship may have darker intentions all in the name of art.

Madeline’s Madeline is not for everyone. It’s pretentious, nonsensical and convoluted. However Josephine Decker has created a film that hard to stop watching. Those who are familiar with the acting scene, the film feels like a parody of the Meisner technique. For others, it’s comparable to abstract art; the longer watch, the more confusing it becomes.

Wit the tone of a psychological thriller about a young adult trying to come into her own while dealing with the burden of guilt created by her mother, it soon becomes a coming of age story, concluding with shock comparable to Darren Aronofsky’s Mother!

Simply put, much like Madeline, the film loses its grip on reality and to become an absolute mess with too much going on at the same time.

Decker’s overstuffed film tries to explore Madeline’s downfall as she tries to please both her mother and theater teacher. As Regina becomes more obsessed with Madeline’ safety, Evangeline continues to push Madeline to the extreme with every performance. As a result, Madeline’s determined to use her mental illness to create a powerful art performance no matter the consequences.

To further heighten this confusion, cinematographer Ashley Connor creates an experimental color palette that only confuses the audience. Much like the film, the audience never know what to expect from the next shot. From soft colors to unusual abstract boldness, random arrays of colors will fill the screen to heighten the scene in an attempt to place the audience into the Madeline’s conflicted confused state of mind. A mind the audience should never experience for a script that shouldn’t exist.

While Madeline’s Madeline‘s script is confusing at best, the film is somewhat watchable by its superb actors who pour their hearts into their weird characters. Molly Parker is an effortless actress, allowing herself to be vulnerable and determined. However, Helena Howard is a powerhouse that demands all attention, Alluring and bold, much like Madeline’s downward swirl, her performance is filled with sadness and rage.

Even though the film tries its best to best to be different, Madeline Madeline‘s becomes more draining with each scene. Strictly for the art-house aficionados, it starts off strong but abandons its audience and simply leaves them feelings unnecessarily uncomfortable just for the sake of art.

While it’s easy to applaud originality, is the applause worthy if no one even cares?