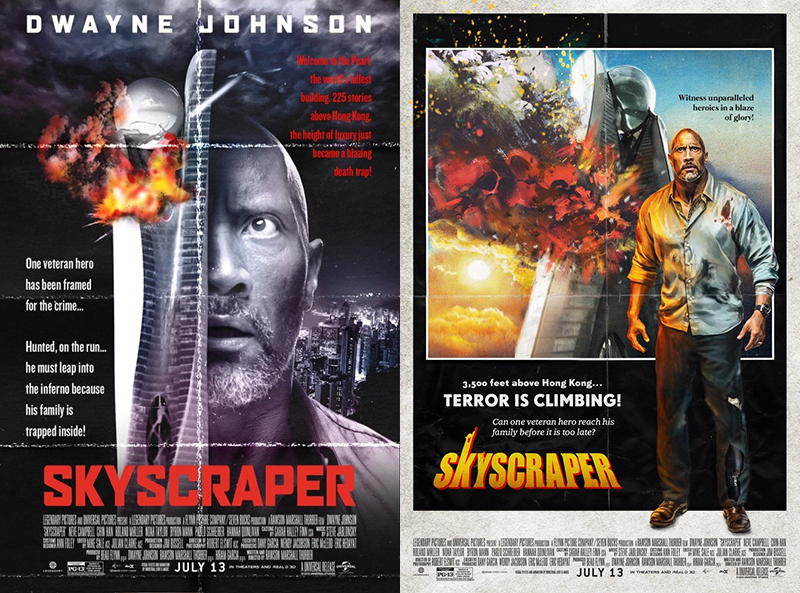 The new Dwayne Johnson action flick Skyscraper is a dual throwback to the claustrophobic action and suspense of geographically constrained films like the original Die Hard and also a knowing nod to the outlandish all-star disaster flick The Towering Inferno.

One glance at Skyscraper’s PG-13 rating and I know for certain the film will lack the ferocity of Die Hard’s R-rated, gut-crunching action, and that it will inevitably contain far fewer memorable cuss words.

However, based on the previews, Skyscraper aims to make its fictitious soaring glass and steel tower one of the film’s gleaming stars.

First, let’s take a moment to commemorate the original 1988 Die Hard as that classic film is celebrating its thirtieth (!) anniversary this summer and is still considered to be the best of its class.

There have been so many sequels to and rip-offs of the original John McTiernan-directed picture that the phrase “Die Hard on a [blank]” became an instant shorthand when discussing any one of a dozen action wannabes in the 1990s that attempted to cash in on its underdog-trapped-in-a-confined-space formula.

In honor of the genre movies Skyscraper emulates, let’s recall some classic and not-so-classic films that memorably highlight real-life skyscrapers. 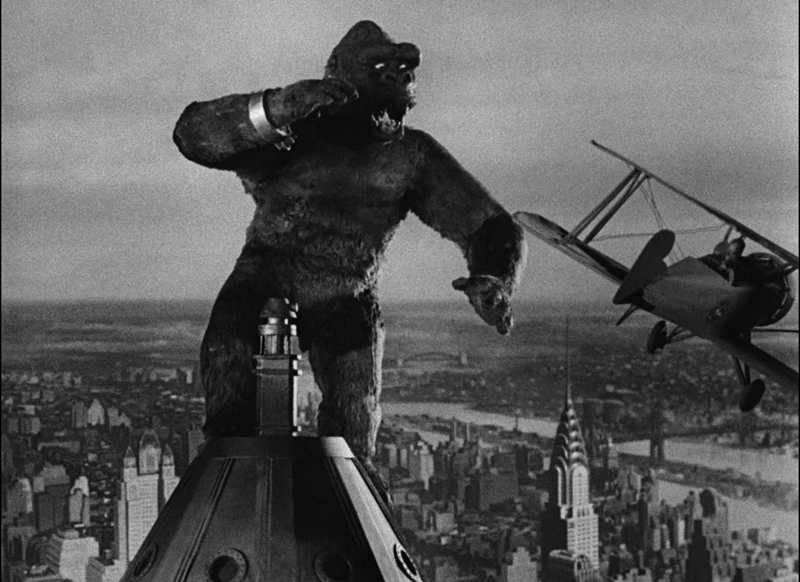 Both the original 1933 stop-motion classic and the CGI-heavy Peter Jackson-directed remake from 2005 feature the giant ape of its title climbing to the top of the Empire State Building to swat down buzzing bi-planes before falling to his doom. The 1976 remake—fine in its day but embarrassingly outdated by today’s makeup and visual effects standards—relocates the climax to the World Trade Center. 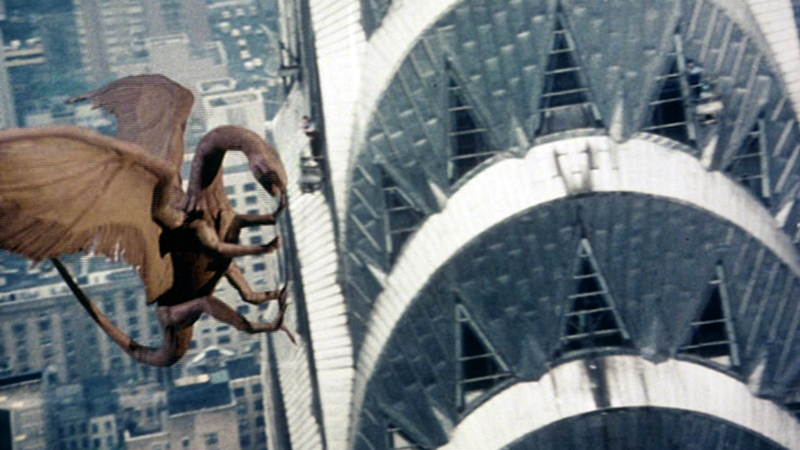 The “Q” stands for Quetzalcoatl, a fabled mammoth Aztec serpent with wings. Taken from its home in Mexico and brought to New York City for exhibition, the creature escapes and nestles into the top of the iconic Chrysler Building, occasionally swooping down to terrorize and behead pedestrians and also lay a plethora of baby Q eggs.

The action classic par excellence from 20th Century Fox studios famously used the parent company’s still-under-construction Fox Plaza in Los Angeles as a practical (and very economical) shooting location. Known to fans as the fictitious Nakatomi Plaza, the real-life Fox Plaza tower is one of the most recognized movie skyscrapers that is not otherwise some sort of historical or cultural landmark.

Sean Connery, Catherine Zeta-Jones, and Ving Rhames headline this medium-grade heist thriller, with the real-life Petronas Twin Towers in Kuala Lumpur, Malaysia, providing a vertiginous backdrop. At the time the movie was filmed, the 88-story-tall structures were the tallest buildings in the world (a record held until 2004); though dwarfed by over a dozen newer single skyscrapers today, the Petronas spires remain the tallest twin towers in the world. 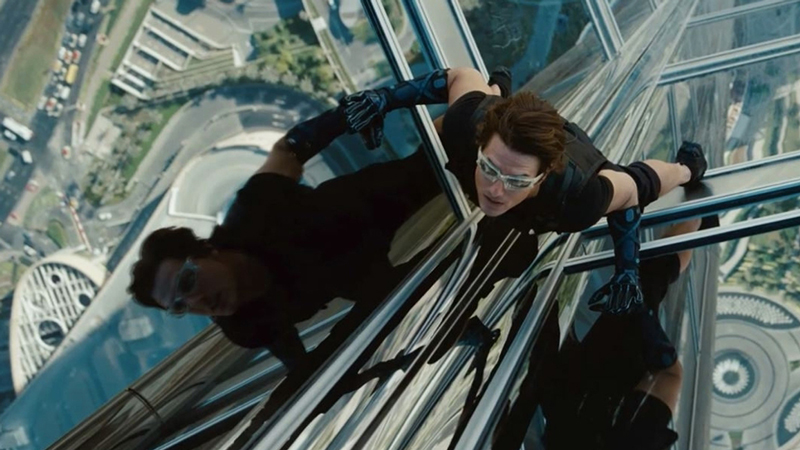 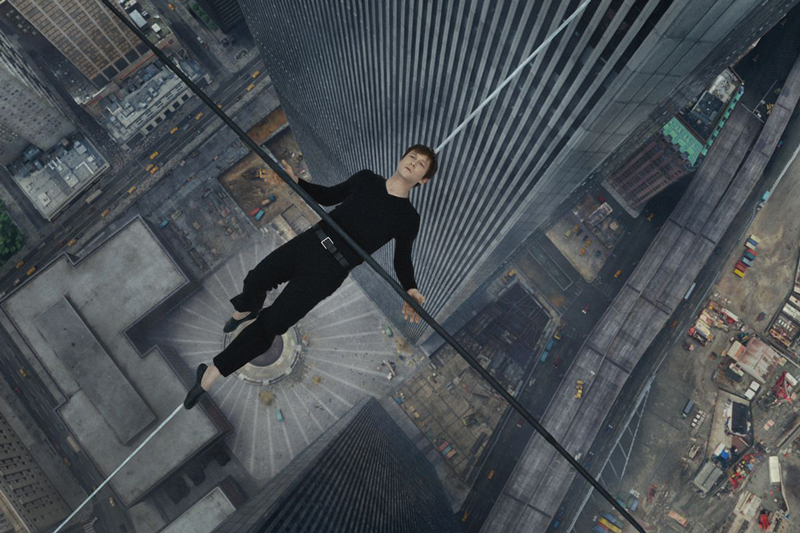 There are too many films to mention that have included a shot of the twin towers of the original World Trade Center in New York City, but there are several films that put the landmark buildings front and center. Some of these films make only brief but impactful use of the towers for a scene or two—such as the setting for two vastly different musical numbers from Godspell and The Wiz and then being used as the location of an infiltration/exfiltration point of action in Escape from New York.

For the 1976 King Kong remake (the one with Jessica Lange, Jeff Bridges, and Charles Grodin), the twin towers were written into the screenplay as the new site of the story’s tragic climax and its poster features a giant Kong straddling both towers while clutching Jessica Lange. Real-life French acrobat and daredevil Philippe Petit famously performed a high-wire walk between the twin towers in 1974, a feat chronicled in the riveting documentary Man on Wire and subsequently given a Hollywood blockbuster spin in the Robert Zemeckis-directed 3D picture The Walk.

And fans who remember the first teaser trailer in 2001 for the inaugural Spider-Man movie will recall a bit showing a helicopter full of bad guys getting snared in a giant web spun by Spidey between the two towers.

After 9/11, this trailer was quickly pulled from distribution and has never been made publicly available since.