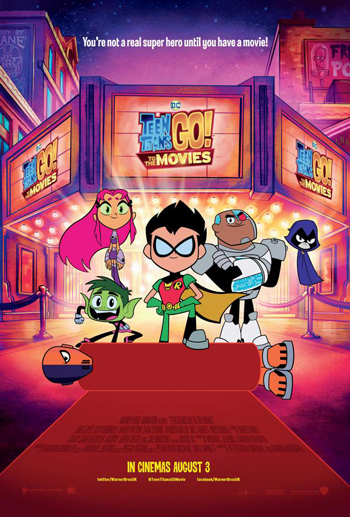 Teen Titans Go! To The Movies brings Robin, Raven, Beast Boy, Cyborg and Starfire from the TV studio to the Warner Lot “…where the Animaniacs live” for their first starring film roles!

Sidekicks no more, The Titans led by Robin are out to prove to the Hollywood system that they deserve a movie.

Even Superman is a dick about it, accusing the teens of being goofballs.

Green Lantern John Stewart is the only member of the Justice League not flaunting his success as a movie star in Robin’s face!

Produced and co-written by Batman: The Brave and The Bold‘s Michael Jelenic, The Powerpuff Girls animation style brought me back to the days when cartoons were just plain fun!

There’s plenty of fourth wall breakage, many references to other movies and even Slade (Deathstroke) is mistaken for Deadpool himself. Not to be outdone by the Direct Competition, Stan “The Man” Lee even professes his love for cameos and can be seen sweeping up in the background.

Man, he’s got a lot of jobs, Watcher, Mailman Willie Lumpkin, FedEx guy. He should slow down!

I’ve not seen more than a few minutes of the Cartoon Network Teen Titans Go!, but I may go back for more. There were plenty of laugh out loud moments, and as someone of my age doesn’t get to guffaw in public about fart and poop jokes that often, you may see me sneak back to the theater for this big, dumb fun movie.

I’ve reviewed countless DC Animated movies over the years, also the LEGO films, and somehow this one exists in yet its own cinematic universe based on the sometime derided Cartoon Network show. Not that it matters much, nor does it matter what world we encounter in the first look at Lauren Faust’s redesigned DC Super Hero Girls in a Batgirl and Mr. Freeze short at the top of this movie. I guess let’s call it the DCCNAU (DC Cartoon Network Animated Universe)! Or not!

Moving on, Movie opens with a stylized animation of the DCEU titles, followed by a parody of the Marvel comic page flip. Turns out a pelican was reading the book! We open on Titans Tower overlooking Jump City before a giant inflatable monster comes to attack. Teen Titans save the day by poking holes in his butt!

Downtown, all of the superheroes, even abstract proto-Fantastic Four “The Challengers of the Unknown” are attending the premiere of Batman Again and are being teased by more Bat-universe films like Alfred (“Coming Broom”) and even a movie about his utility belt. Robin gets no respect and flies to Hollywood to demand his own movie.

Without an arch nemesis and Robin being a sidekick, executive producer Jade Wilson (not to be confused with Zach Snyder) refuses to make the film.

The Titans travel back in time to save Krypton, save the Waynes from Crime Alley and also steal Wonder Girl’s lasso to ensure that the world would need the Titans to survive. There was dubstep on Krypton, I don’t really know why but they altered the future and saved the doomed planet from exploding. This plan doesn’t go so well, so they travel like DC’s Legends of Tomorrow to right the timeline.

Besides the Deadpool name drops, Stan “The Man” and an epic Batman and Justice League Lion King montage, the movie is filled with some great singalongs, most notably the aptly titled “Upbeat Inspirational Song About Life” performed by Michael Bolton.

Those aren’t the only familiar names you’ll see as the credits roll by. Will Arnett plays Slade, the Titans themselves are impressive (Scott Menville, Hynden Walch, Khary Payton, Tara Strong, Greg Cipes) and Kristen Bell as Jade, Nicolas Cage as Superman, Patton Oswalt as The Atom, Lil Yachty as Green Lantern, Halsey as Wonder Woman, Jimmy Kimmel as Batman and Cage’s younger son who’s real name is Kal-El plays young Bruce Wayne (please do something more with this kid!).

Bolton’s cat character has a fate that is too good to spoil. Pay attention, kids!

There is a lot of fun here, a total gas, giant robots and monsters destroying cities, time travel, cool tunes and cool toons, and these Teen Titans get to earn some stripes in the eyes of the ‘real’ Justice League by the end. They took digs at Batman V. Superman and the self-aware comedy works just as well here for a PG movie as we saw in the R-Rated Deadpool movies.

Raven is a standout character, perhaps because she was more powerful and mysterious than the others, but each member of the team gets to shine from Cyborg, Starfire and Beast Boy all using their powers to win the mission but also support their leader Robin as a friend.

I highly recommend this for anyone from an older DC fan that misses Batman: The Brave and The Bold, Dexter’s Laboratory and animation of that ilk.

Don’t leave before the end of the credits, there is an Easter egg for Titans fans.