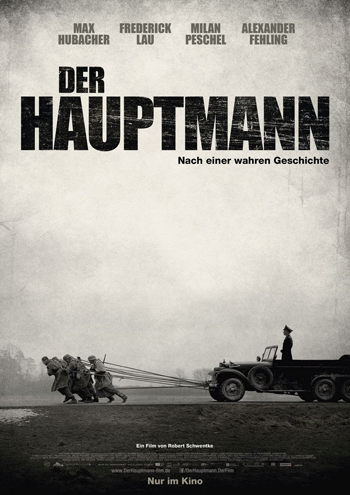 In this brilliantly savage World War II drama set two weeks before the end of the war, a deserter from the German army finds a Nazi captain’s uniform that gives him unlimited power and authority.

Max Hubacher, in one of the best performances of the year, is astounding in the lead role of private Willi Herold.

When we first meet him, he’s a grimy, desperate man running for his life from his commanding officer (Alexander Fehling), who orders his men to kill the “little piggy.”

His escape is sheer luck, as is his stumbling across an abandoned Nazi officer’s car, complete with uniform. Herold dons the uniform and, to an empty field, begins to play-act being the same kind of arrogant, dismissive captain he narrowly escaped from.

That’s when a lost private finds him to report in and the playacting becomes real. Herold’s transformation from a scrappy survivor to an imperious officer only grows more assured the longer he plays the part.

In Hubacher’s layered performance, we see his underlying panic at being found out give way to elation. He’s actually pulling this off!

It’s a high-wire act and at first we root for him to succeed, the same way we cheered for Leonardo DiCaprio not to get caught in Catch Me If You Can. There’s a subtle vein of absurdist humor running throughout, as scenes such as “Do you concur?” from the Spielberg film play out in which Herold bluffs his way through any question of his authority.

Even when he encounters the captain who was trying to kill him, he skates through. His former commanding officer happens to be played by Alexander Fehling, the same actor who doubted Michael Fassbender’s credentials in Inglourious Basterds, and the scene here is just as tense.

At first, Herold uses his new role to secure the best the local village has to offer: Their freshly cooked roast and potatoes, their finest bed, and some schnapps. But soon, he’s being called on to make real life and death decisions.

That’s when we realize that Herold isn’t just a con artist looking to survive. This former “little piggy” glories in his newfound power. Amidst the chaos of the end of the Third Reich, Nazi officers are desperate for anyone who can take charge and Herold is happy to oblige. And that’s when he crosses the line into utter depravity.

I went into the film not realizing it was based on a true story — and not knowing just how despicable Herold was.

The Captain is an all-too-timely parable about the abuse of power and how uncomfortably simple it is for everyone to simply look the other way. Everyone is too intimidated to challenge Herold’s statement that that he is acting on direct orders from Hitler.

Despite his obvious youth — Hubacher is 21: the real Herold was only 19! — Herold’s brashness makes any doubts about his authenticity seem laughable.

He is met with only a few real checks: One comes from a fellow deserter, who clearly sees through Herold’s charade, but is only too happy to escape the firing squad himself.

The stunning black-and-white cinematography (by Florian Ballhaus, son of the late, legendary d.p. Michael Ballhaus) convinces us we could be watching something actually shot in 1945.

Schwentke tilts the film into outright absurdism in places, showing us the kind of decadent excesses dramatized in Visconti’s The Damned.

The film ends with the facts surrounding Herold’s ignominious end — and a haunting image of the destruction he caused during his brief reign.

Unfortunately, the end credits contain a wholly unnecessary segment devised to convince us that that the horrors committed by Herold could happen again today.

The film, which serves as a fierce indictment of all abuses of power, would have been stronger without it.