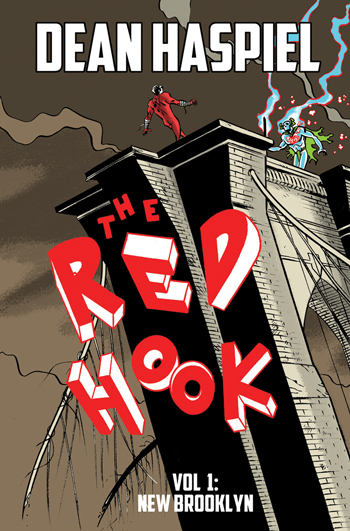 Written and Illustrated by Dean Haspiel
Published by Image Comics

Dean Haspiel is a living legend. His works are always strong. Whether or not you enjoy what he does, you have to give him credit. He does do mainstream work on one hand. On the other hand, he’s constantly pumping out new work that you haven’t seen before.

Such is the case of his latest book, The Red Hook.

It’s an independent book that also does have some elements from his mainstream work. That’s actually really cool to see him meld the two.

The book starts off with the Red Hook being captured by Doctor Hugo Girl. It shows him escape the trap and then go forth with fighting his enemies.

We then learn more about the Red Hook himself.

It turns out he is a super thief who is given the Omni-Fist of Altruism. And this thief has to become a superhero against his will.

The setup is strong and it allows Haspiel to really cut loose.

It is sort of crazy to be sure.  But it’s wonderfully crazy. For example, the city of Brooklyn is actually a living creature in this comic. When Brooklyn gets it’s heart broken, it secedes from America. And trust me, that’s just the beginning of Haspiel’s wacky world.

It’s imaginative for sure.

Haspiel is pretty much a one man show here and the art is as dynamic as the writing. The Red Hook tries not to do the heroic thing in the beginning, which I loved. Then he feels the Omni Fist of Altruism clutching his heart. He is forced to do the right thing. It’s little touches like this which made the book stand out. Another example of that is when the residents have to form a new economy. It’s well thought out and feels fresh.

He also makes the supporting characters vivid and fun. My favorite is the Red Hook’s girlfriend, The Possum. They have a romance here which is nice and breezy. You want these two to be together.

Haspiel does another fine job here. He has created a book that demands you add it to your library. Every page brings something new and it’s a delight.