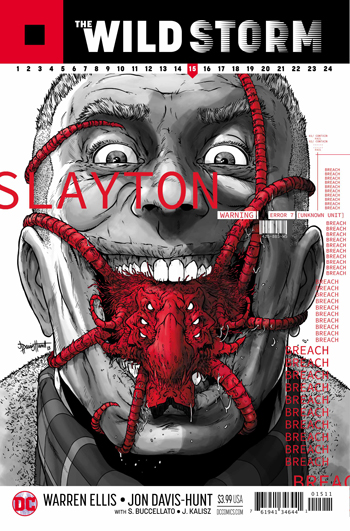 This is a hell of a book that is just getting more and more interesting with each issue.

These alternative takes of the Wildstorm Universe are all damn intriguing. Warren Ellis has outdone himself writing this title. The results are in and it’s stunning.

The opening scene, is the best part of the book. We are treated to Henry Bendix being asked what he wants. He responds with my favorite line in the book which is “I want to wear Craven’s skin while I spray his family with nerve gas at Christmas.”

I laughed out loud at this. Ellis sure knows how to begin a book and keep me interested throughout.

This was just a beautiful beginning.

From there, we see Jack Hawksmoor in a police station. He is confused as to what he is doing there. He eventually realizes he may be a slave and that he may have been experimented on. It’s a brutal scene that ends in sheer horror. It’s hard to read.

Then, there is another hard scene that follows with John Lynch in a bar. He meets a guy named Phillip.

And their conversation takes up most of the issue. Its a great centerpiece and sets in motion what is going to happen for the rest of the series.

The art by Jon Davis-Hunt is superb yet again. His clean line work is second to none in the industry. Every page is a delight for sure. And every panel is something new. I love what he is doing.

Things are heating up in this book. Start from issue one and read up to this current issue. You won’t be able to put it down. I certainly have not be able to.