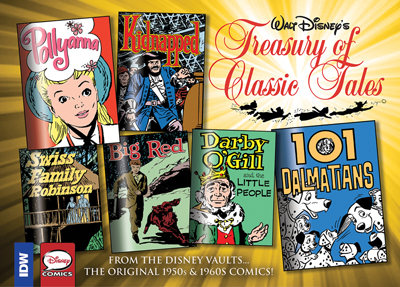 Walt Disney’s Treasury of Classic Tales Vol. 3 from IDW might best be looked on as a collection of rare illustration art by Jesse Marsh.

Longtime Dell Tarzan artist Marsh draws no less than 10 of the sequences featured in the book, each of which is designed to publicize a then-current Disney film. Since this volume brings us to the late 1950s/early 1960s, many of those films are not, as one might expect from Disney, animated but rather live action.

Although some have slipped into obscurity over the years, if you’re a Disney fan, you’ll know most, if not all, of the movies adapted. The Parent Trap, Pollyanna, Swiss Family Robinson, and Babes in Toyland are probably the most well-known of these. Others include Toby Tyler, Moon Pilot, In Search of the Castaways, Big Red, and Darby O’Gill and the Little People. The only actual Disney cartoon adapted here is 101 Dalmatians.

The adaptations are all written by one Frank A. Reilly, who does a good job of hitting the highlights of each of the pictures within the defined space of each Sunday strip and the amount of Sundays allotted. A few points seem rushed but all things considered, Reilly succeeds admirably.

Actually, while Reilly is credited for all the stories on the Contents page, the actual story notes credit legendary Mickey Mouse artist Floyd Gottfredson as the writer on the Babes in Toyland strip. Clearly a mistake but in which direction?

Marsh offers his colorful, unique, and interesting style throughout, still good even as his health—as noted in the texts—began to decline. As one might expect from a Tarzan artist, he’s at his best when doing the big outdoor stories.

Respected animation and Disney historian Mike Barrier provides the introductory texts, noting that the stated concept of publicizing new movies with this series was often defeated by the timing, which found them in the Sunday Funnies weeks before or months after the pictures hit theaters.

Not really the studio’s best period by any score but even where the movies weren’t memorable, some of these strips bring them to a new life. If you were a kid in these years—as I was—you, too, probably tore eagerly through the Sunday paper looking for what, really, amounted to little more than colorful advertisements designed to get you to beg your parents to spend money taking you to the movies.

And it probably worked!