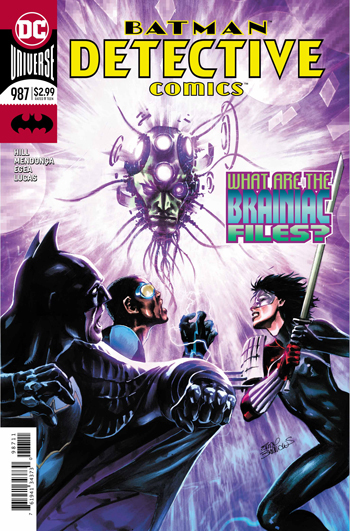 This is the conclusion to Bryan Hill’s writing here on Detective. I’m totally sad about this.

Although James Robinson takes over writing the next issue (and he’s very good), Hill’s short run has been great thus far. I hope he comes back. I also hope Robinson keeps the quality up.

The opening scene has a siege on Wayne Enterprises by Karma and his gang. Then we see Batman and his gang in the Batcave getting ready. Black Lightning is there and Katana has now joined them. They also have the Signal and Orphan.

They make their way to Wayne Enterprises. In a thrilling scene, they break into the room and attack Karma! It’s great to see the big fight and all the various characters battle. It eventually leads into what we all want to see, which is Batman versus Karma.

And that’s what we get! I love the way Hill sets it all up. The fights are clean and choreographed by Mendonca.

Together, the climatic fight of this storyline is very satisfying indeed.

The ending of this storyline has a nice ending for Black Lightning. It leaves the door open for future stories. I hope so. Hill really has a handle on these characters and he strutted his stuff on this story. Mendonca did nice work too. Hopefully, they both get reunited soon.