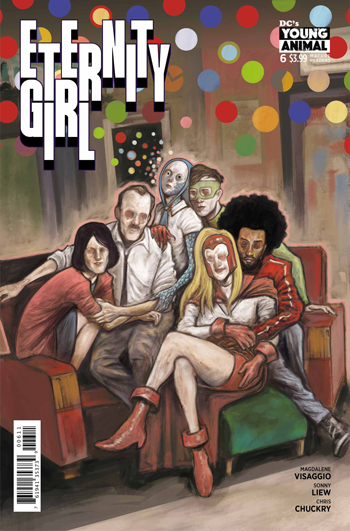 Eternity Girl was a thrilling, kaleidoscopic exploration of life, death, and rebirth, wrapped up in a superhero comic.

And now it’s over.

The final issue sees Caroline’s best friend Dani confront her in the hopes of talking her out of destroying the universe, while Crash and Madame Atom try to influence the outcome.

Ultimately, it comes down to a choice Caroline must make: life or death, not just for her, but everyone across all realities.

Magdalene Visaggio and Sonny Liew provide a suitably mind-bending close to the series, with Dani feeling every possible iteration of herself as she chases Caroline.

There’s a splash page that approximates the infinite expanse of possible existences, but also some very fine work on simple expressions.

And while the ending seems kind of pat for a book this wild, there’s still a lot to chew on visually.

Caroline Sharp’s journey may be done, but I hope Visaggio and Liew continue theirs together in some form.