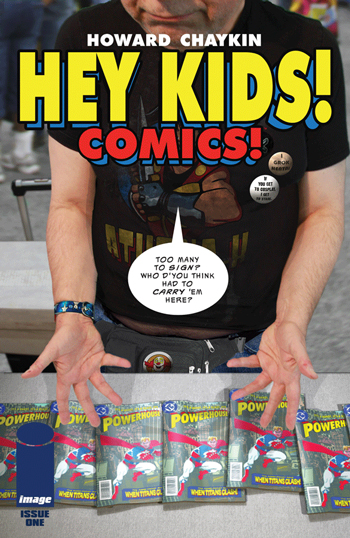 Howard Chaykin is one of the few living comic artists still producing top quality work that feels like it’s from a bygone era.

His last few books such as The Divided States of America and Midnight of the Soul were just amazing.

This time, Chaykin turns his watchful eye to the history of the comic book industry. Though it is a fictionalized account, there is enough truth layered in here, that it may make this Chaykin’s masterpiece.

The book starts off in the year 1967 in New York City. We are at the Broadway premiere of the Broadway musical Powerhouse (I’m guessing inspired by the show, It’s a Bird, It’s a Plane, It’s Superman).

There is a man named Meyer Hershenson who represents the publisher of Powerhouse.

He’s celebrating the success (though the television show seems to be more lucrative).

Then, a homely looking fellow named Irwin comes up to him. It gets tense. Meyer gives Irwin a few dollars and then Irwin gets escorted off the premises by the police. When Meyer’s date asks him if he knew the guy, Meyer said he used to work for him.

In fact, Irwin and his dead partner thought the entire thing Powerhouse thing up.(watchful fans might recognize Powerhouse from the 1994 Malibu Bravura series Power and Glory also written and Illustrated by Chaykin).

With that simple setup, Chaykin gets his book going. But it resonates so deeply because it’s put together powerfully both in writing and art.

From there, we flash back to 1945. We meet Ted Whitman and Ray Clarke. They are both just fresh out of the war. They are looking for jobs in the comic book field. They worked in it before they left overseas and now that they are stateside, they figured that they would get back into it. They go to a publisher (Yankee Comics Publications) who tells them that the business is going bust. He tells them that the person who figures out the next biggest thing in the field will have a lifelong job at Yankee. With that, the duo go on their way.

We also get a glimpse of the happenings over at Verve Comics.

Then, the book jumps ten years. A few pages later, it jumps in time again. And then again. It shows what happens to these characters all the way up to the year 2001. And there are some shocking things that happen to these people when we get there.

Chaykin has never been better. His art is superb for sure. His writing here however is his best. The dialogue just pops and is perfect no matter what year we are in. Even better, I read it twice and discovered new things the second time.

This is a must for comic book fans.

Chaykin has taken stories I’m sure he’s heard (or maybe even lived through) about comics and made this book. Though it’s only a first issue and there’s more on the way, I feel comfortable saying that the rest of the series will be great.

Chaykin’s hands are more than capable of delivering a classic.

And that’s exactly what I think we have gotten from him here.