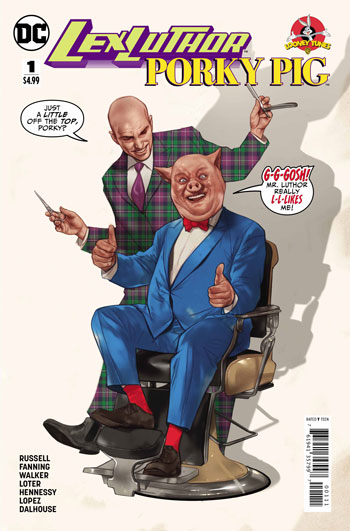 Mark Russell is rapidly becoming one of the best writers in modern comics and this issue is another feather in his cap.

The opening of this book has a redone Porky Pig as a Wall Street success who gains everything and then loses it.

Russell likes to ground his stories with a healthy dose of reality. He also layers them with relevant political satire.

This premise is smart and actually funny.

Porky wants to kill himself. He gets a terrible job as a waiter. Watching him take an order from a customer with his lisp is hilarious. He’s determined to get out of this dead end job.

At the point in the story, Lex Luthor enters.

Lex hires Porky to be the spearhead of Lexcorp’s social media campaign. Porky gets hired for the job, even though he has no experience with social media. Porky settles in and Lex loves him! They even get gyros from the cafeteria together!

Russell provides a bunch of laugh out loud moments. The best one of them all, is that Porky is actually successful at the job! The site Lex creates, Lexema, is an instant hit!

Eventually, Porky finds out that there is a sandwich thief at Lexcorp. I couldn’t stop laughing at this. It’s so funny to watch Porky try to catch who this person is! If he doesn’t, he may lose the respect he thinks he has from his colleagues.

Lex meanwhile is trying to get into the pharmaceutical business. He is using Lexema to shill it out to people. But then, it’s revealed that he is just doing it to get people’s passwords.

Porky meanwhile isn’t doing his job. He’s still trying to track down the sandwich thief. It just gets crazier and crazier. All of a sudden, it is starting to look like the sandwich their might indeed be Lex Luthor himself! What’s a pig to do?

Forget the second short story in this book. That one is a trifle and while it’s cute it doesn’t compare to the quality of the first story.

Russell takes this wacky idea and just runs with it. The art is by the ever amazing Brad Walker. He does an incredible job with each page. I just wanted more after reading this as it ends hysterically. This is one of the better releases of the year.