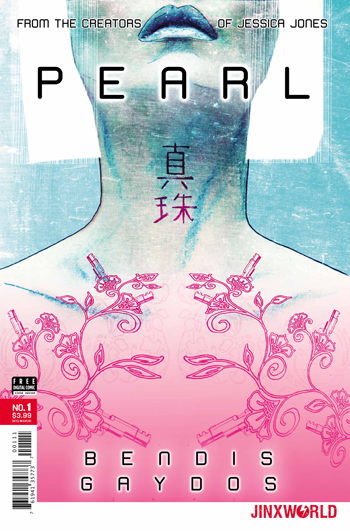 The question of course, is if it’s any good.

It’s been awhile and who knows what Bendis might be churning out now. I’m happy to say he is as good as ever. It might even be slightly better than his previous work.

We are introduced in the first pages to a woman named Pearl. She seems to have a unique skin condition. As the issue goes on, we learn more about it.

What’s great about this is that Bendis is a writer who does his research. He has obviously done his homework on this condition.

He also has done his homework on the culture of tattoo artists. The opening scene has Pearl talking about a rare tattoo that she has of some sort of spider-like image from someone called Iriguci. The conversation about it is classic Bendis. It’s dialogue that is as interesting as something you would see in a Mamet play.

We start to learn more about Pearl as the issue goes on. She is a tattoo artist in San Francisco. She also has a special ability that gets her into trouble. An incident happens in which she is forced to pull a gun.

She is then pulled into the Yakuza and is an assassin for them by circumstance. It all leads to the end of the issue in which she is introduced to Rick, and he has a deadly task for her to complete.

This is some excellent work. Nobody can set up a crime comic like Bendis. I’m intrigued like you wouldn’t believe. And Gaydos is at the top of his game.

This feels fresh and new. I love it. Hopefully, this is the start of something great. I will say, that it certainly feels like it.