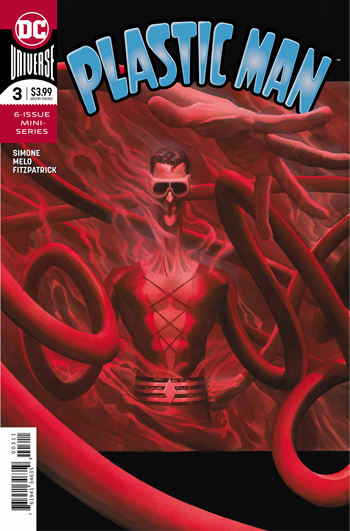 Facing some really bleak circumstances and desperate to protect an innocent child, Plastic Man tries to infiltrate “the Cabal” by appealing to Man-Bat, but things go south pretty fast.

Gail Simone is juggling a few balls here, between Plastic Man being a murder suspect and tied up with the cabal, the implication that the JLA may be involved, and people from Eel O’Brian’s criminal past plotting against him.

The problem is that none of it lands very well.

Filtering the goofy Plas through a noir lens is an inspired idea, but the gags are a bit weaker this time around, including a nod to Harley Quinn that falls flat.

The plot this issue is also pretty thin and supporting characters like Doris haven’t been allowed to make much of an impression. Most of this issue is just Plas riffing off of Pado, and one can only hear someone say “wang” as a catchphrase so many times.

Adriana Melo’s art is a little rougher too this time around, but she still does a fine job of blending the more animated Plas with a darker setting, though Cole City itself remains a bit of a cipher.

Plastic Man #3 feels like it’s treading water, but hopefully the next issue gets things back on track.