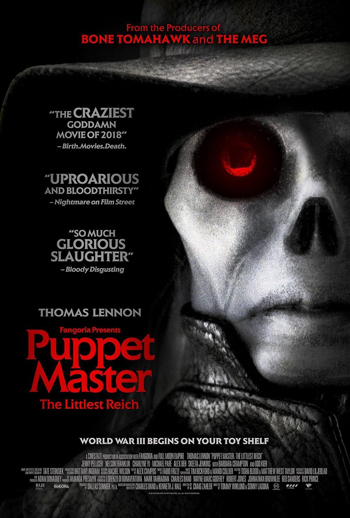 Charles Band’s Puppet Master series is an interesting franchise in that the series itself is a lot more interesting than any of the individual films themselves. What I mean by that is that while there are entertaining films and most certainly terrible films in it, the series, which is comprised of eleven films (twelve if you count the crossover film Puppet Master vs. Demonic Toys), is something to behold in just how elaborate, convoluted, and frequently contradictory its internal mythology has become since the first film in 1989.

The newest installment, Puppet Master: The Littlest Reich, seeks to step away from that continuity in a reboot of the series, embracing a thoroughly violent and nihilistic edge that pushes the property into the murky territory of shock cinema.

Set in present day Oregon, the film centers on Edgar (Thomas Lennon), a recently divorced comic book artist whose dealt a double whammy when his brother dies. Returning home and looking through his brother’s belongings, he finds franchise mascot Blade stuffed in a box in a closet. Realizing that the puppet is part of infamous Nazi/puppeteer/necromancer(?) Andre Toulon’s (Udo Kier) collection, he, his girlfriend Ashley (Jenny Pellicer), and friend Markowitz (Nelson Franklin) travel to a convention celebrating the legacy of Toulon’s work. Suddenly, the various puppets being brought to the collection come to life, quickly spreading chaos and carnage as they slice, dice, and mutilate their way through the entire hotel, as Edgar and friends try to survive the night.

Right off the bat, there are two things that will make or break the film for longtime fans and new viewers.

The first is the re-framing of Toulon and the puppets as Nazis. Arguably the best film in the series, Puppet Master III: Toulon’s Revenge, revealed Toulon as a WWII anti-Nazi saboteur and the puppets as unequivocally good guys (though they were villains in the first two entries). To see the film do a complete 180 with these characters is a bit odd, especially when it’s basically a reversal of the Inglourious Basterds style revisionism the third film did so well and Nazi’s continuing as villains in the series up until present day.

The other potential turn-off is the tone of the film, which is genuinely vile and gratuitous, bordering on mean-spirited. Seemingly an attack on “political correctness” and “equal opportunity punching”, the film is content to get you to call it every “-ist” adjective you can think of and then some.

Gay or straight, black or white, Jewish or Christian, everyone’s going to die in the most horrific way possible. One particular scene involving a pregnant woman on a bed might just go down as one of the most stomach-turning things I’ve seen in a while.

Penned by Bone Tomahawk and Brawl in Cell Block 99 screenwriter S. Craig Zahler, it stands to reason that the film is as enamored with its bloodshed as it expects us to be, but while Zahler’s other films reach for something deeper, Puppet Master: The Littlest Reich is all about classic gross-out fun and if you can vibe with it on that wave-length, you’re in for a fun, blood-soaked 90 minute thrill ride.

If you’re watching a Puppet Master film, however, you’re there for the effects.

True to form, most of the puppets are rendered using actual models and puppetry. Blade, Pinhead, Torch, and the rest of the gang look pretty good, though Blade’s re-design still doesn’t sit right for me. There’s also some new puppets joining in on the fun as well, my favorites being Amphibian and “Junior Führer”.

True to the Fangoria banner the film was released under, the gore effects is lovingly rendered using practical effects Intestines are spilled, heads are decapitated, and limbs sliced off with wild abandon. The only downside is that the film in the last act is shot primarily in dimly lit corridors and tight spaces and the poor lighting and cinematography often obscures the action happening on scene, leading to occasional confusion on who’s attacking who.

Probably the biggest problem with the film is a structural one.

Once the puppets come to life, the film quickly loses any pretense of a narrative. Edgar’s family problems and love life quickly become non-entities and the film ironically feels like a Full Moon Video highlight tape. At one point, there are almost four kill scenes within the span of 15 minutes, all with characters we barely know or have never seen before. This speaks again to the “throw every organ at the wall” approach to storytelling the film is going for, but at times it feels a bit repetitive. It’s a bit telling that there’s more narrative in the film’s animated opening credit sequence than there is anywhere else in the entire film.

Quite frankly, I’m a bit impressed a film like Puppet Master: The Littlest Reich managed to be made and released.

It’s the antithesis of the more “elevated” horror films gaining popularity thesis while simultaneously rejecting almost everything in the franchise before it. It straddles the line between being like crack to the lizard brain half of my film tastes and frustrating the more cultured side of me with its lack of story and overarching point. I suppose that’s entirely the point, but I doubt you’ll see something as bonkers and so thoroughly obsessed with pushing your buttons as this for a while.

P.S. For when they inevitably make a sequel, bring back Six Shooter!

Puppet Master: The Littlest Reich is now playing in theaters
and is also available on Digital HD and On Demand.