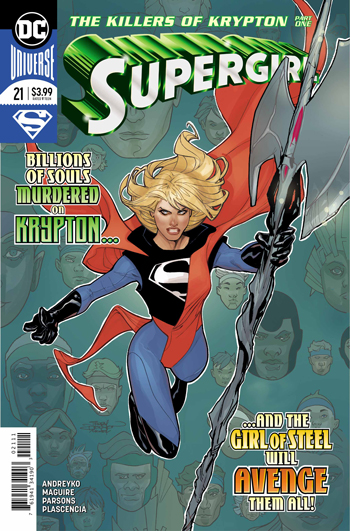 A new creative team takes over this issue and in just a few pages they make this book excellent.

To be fair, it wasn’t all that bad before. It was just passable. Not great, not terrible.  Both writers Steve Orlando and Jody Houser did a decent enough job.

However, new writer Mark Andreyko jettisons most of their work and takes this book in a completely new direction.

This turns out to be a positive step.

The first thing he does is take out a lot of the dead weight from before. Instead, he decides to tie it into what Bendis is doing in his run.

This means he gives Supergirl a new mission and purpose.

Kara is devastated about the loss of Kandor. Superman was hurt by it, but nothing like her. In the best scene of the book, she explains to Superman why. It’s a wrenching scene as she makes the point that she actually lived on Krypton and grew up there while Clark grew up on Earth. It’s a brutal scene and in it, Andreyko demonstrates he has a good handle of Supergirl’s character and emotions.

She wants to know who else  knew about Rogol Zara’s mission. She takes his weapon and goes to see Hal Jordan to help figure it out. That leads to an eerie scene that leads Green Lantern to wonder why he is unable to get certain information from his power ring.

The issue ends strongly with Kara going to figure out just what exactly is going on.

This is a good connecting story that makes the “Super” line of books feel bigger. I love that. The art by Kevin Maguire is especially surprising. He can do faces and humor well, of course. But here he hits the darker emotional tone needed easily and wonderfully. It’s nice to see him stretch his artistic muscles and he succeeds well.

This is a great start to a new story. It’s great rather than good and I’m excited to see what lies ahead. Let’s see what happens.