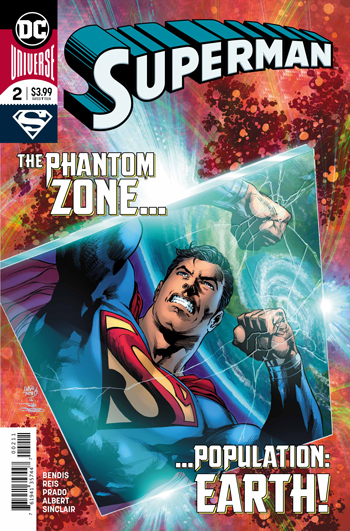 Leave it to Brian Michael Bendis. He actually does something completely ballsy in this issue. I never actually thought that this day would come. He brings the Nuclear Man into the comics.

Who is the Nuclear Man, you ask?

Oh, you’ve got to remember the Nuclear Man! He’s the villain from the much reviled film Superman IV: The Quest For Peace.

Good for Bendis for doing something that’s kind of crazy. That being said, the three or so pages he appears in are just perfect for the character. In that scene, he fights Rogol Zaar (more on that later).

After the events of the last issue, Superman is thrown headfirst into the Phantom Zone!

There are many amazing details Bendis puts in. He has the Justice League asking Superman a bunch of questions. The questions are things along the lines of “can the Earth possibly survive this environmentally?”

It’s details and ideas like this that make a comic by Bendis pretty great.

Superman refuses to give up. He has to get out of there because he knows that the Phantom Zone is one of the worst places to be. He even says that this is where the universe’s garbage goes.

The most intriguing part of the story is that Rogol Zaar has made quite a name for himself in the Phantom Zone. We see him fighting in flashback in the opening scene. We see him again fighting the Nuclear Man. And it’s looking like Superman may indeed need him to get out of this hellhole. This should be interesting.

The art by Ivan Reis is quite super as well. It compliments the writing perfectly. Reis really can do it all. He can make the quiet moments sing. He can also do a kickass action scene.

I’m loving what Bendis has brought to the table. The last shot of Superman wondering if he will ever see his family again is just perfect. I’m 100 percent on board with this direction. It’s thrilling.