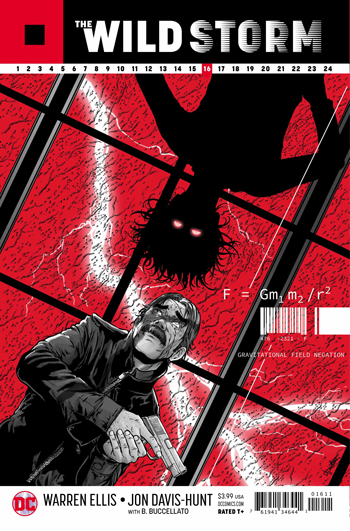 Warren Ellis always impressed me as a writer and with this title he has done something truly cool. We are two thirds of the way through this storyline and it hasn’t let up so far.

The opening few pages has Angela Spica discovering someone following her virtually.

She decides to confront this person and it doesn’t go as expected. It does however set up the rest of the series from here on out. Ellis makes the confrontation smart and interesting and it’s just good.

Then, Ellis cuts to John Lynch on a mission. He tracks down Gloria Spaulding to give her a warning.

The silent three pages of Lynch entering her domicile are excellent. Jon Davis-Hunt can really tell a story without words with his art. He proves he can do it again here.

The rest of the issue is Lynch and Spaulding talking and it’s a foreshadowing of things to come. It’s incredibly eerie and creepy. The scene ends with Spaulding telling Lynch to go and then she destroys the property. It’s a little cliche but it’s extremely well handled so I didn’t mind.

The end of the issue has a revelation and it’s pretty damn cool. I loved the last line of the book (I won’t spoil it) but it made for an exciting cliffhanger.

This issue is awesome both in writing in art. Kudos to the creative team for telling one hell of an original story.