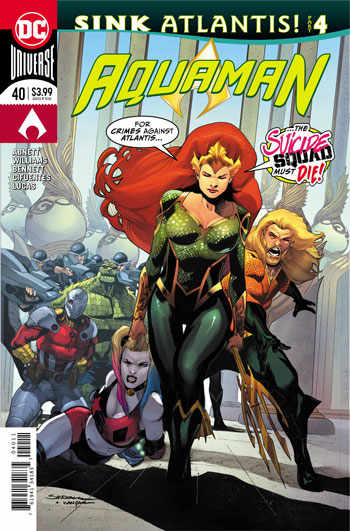 This is the finale of the “Sink Atlantis!” storyline!

The Suicide Squad and Aquaman spend the issue trying to survive this whole mess of trouble.

What kind of trouble?

The Suicide Squad was sent to sink Atlantis!

Aquaman has been trying to stop it.

Meanwhile, Mera is holding the world hostage and may indeed flood the Earth and kill the entire population. Tensions are at an all time high! Everyone is mad at each other! Will this resolve itself or will everything in this world get flushed down the proverbial toilet?

The issue starts with a long slugfest between the Suicide Squad and Aquaman’s team of miscreants. It’s a long and involved battle that is drawn in a decent way by Bennett. I did lose track of who was hitting who after a while.

It did get a little muddy who was actually who’s side and how it relates to the overall storyline.

After this battle ends,  we get a another final battle where someone must be sacrificed to save everyone. It’s hardly dramatic and almost feels like an afterthought. I wish it could have been stronger but it just didn’t feel all that important.

The ending is a little too pat for my tastes but it isn’t bad. It just feels a bit flat after all of that build up. There was a lot of drama that didn’t really have a big payoff.

It just sort of ended. And that was a little disappointing.