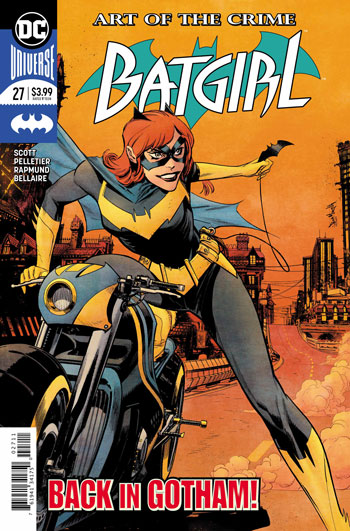 The new creative team on this title continues their run with this issue. Barbara starts off this issue in an ambulance. The layouts on the page make for a nightmare effect!

Waking up in a hospital, Barbara finds out that the chip that restored her paralysis is failing her. The fight with Grotesque has knocked her around and she’s in for a battle

Sadly, it’s just not that interesting.

The first third of the book is Barbara in the hospital and it doesn’t get much better than that. We get a lot of talking and a lot of inspiring words.

Yet it all feels rather forced to me.

Writer Mairghread Scott moves things along at a snail’s pace for almost the first two thirds of the issue. When Batgirl finally springs into action it’s too little, too late.

You just don’t care by that time.

She eventually comes across Grotesque. They don’t do much but talk and pontificate. It’s dull. And there’s literally no fight at all. He just overpowers her and she becomes a victim for the second time in two issues.

It’s left as a cliffhanger but I hardly care to read the next issue. The art is dull and lifeless. Maybe it’s time already to get a new creative team? It’s really that tedious of an experience to read this.