Ah, good taste! What a dreadful thing! Taste is the enemy of creativeness.”

Years ago, I had a lunch with an internationally famous and celebrated cartoonist of the generation before my own, a man who’d made his bones in newspapers as opposed to comic books—as well as maintaining a successful career in other media. We were brought together by a mutual acquaintance, and as I recall, it was this acquaintance who brought up the subject of Robert Crumb.

The internationally famous and celebrated cartoonist had nothing but disdain for Crumb…not on the basis of subject matter, but for what he perceived and identified as the overworked nature of his stuff. He felt that the obvious and apparent labor invested in Crumb’s craft was exhausting and off putting to him, bereft as it was of anything resembling spontaneity.

I didn’t agree, and said so. From his perspective, spontaneity was all that counted in this discussion, which struck me as bullshit. But I had enough respect for the internationally famous and celebrated cartoonist that defending a position that was clearly subjective seemed pointless.

And, frankly, I didn’t really give a shit what he thought, anyway, at least in this regard.

For the record, lunch was delicious—and I’m pretty sure it was the mutual acquaintance who picked up the tab.

More recently, a colleague of mine, in the course of an unrelated phone conversation, had the dubious honor of introducing me to what ultimately turned out to be the current wave of Crumb reconsideration.

In the course of this chat, he seemed genuinely surprised, as an inordinate number of those younger than I seem to be about their earnestly expressed opinions, that I didn’t embrace his assessment of Crumb as loathsome and vile wholeheartedly and immediately—or at all, for that matter. 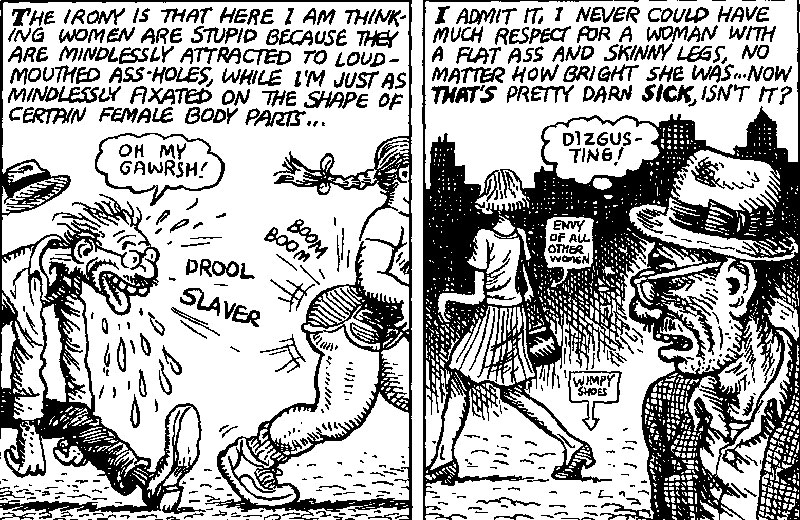 Now, I’ve never met Robert Crumb, and he doesn’t need me to defend him. Neither, for that matter, does Pablo Picasso, despite an alarming number of my comic book colleagues who regard his work as miserably drawn, as opposed to brilliantly considered, conceived, designed and painted.

But I digress. As fucking usual. Back to Crumb—and the current spate of critics beginning to shit on his parade and fuck up his legacy in a run up to his eventual death.

I include both Crumb and Picasso here because I earnestly believe that both are utterly justified members in the canon of great, often transgressive artists of the twentieth century—a list that includes, once we expand to include the other arts, Jean Genet, Judy Chicago, John Waters, Frida Kahlo, Charles Bukowski, Leni Riefenstahl, Ezra Pound, Laurie Anderson, Vladimir Nabokov, Joan Rivers, Mel Brooks, Aline Kominsky and many others.

What tethers these members of a creative class together is, for my money, a complete disregard and uninterest in what the audience would define as taste, good or otherwise. I’m going out on a limb here, but I’m willing to bet they couldn’t give a fuck what anyone thought of them or their work. They just did it, and let the chips fall where they may, with hope for the best, and occasional expectations of the worst.

Not a people pleaser among them…except maybe Leni Riefenstahl. 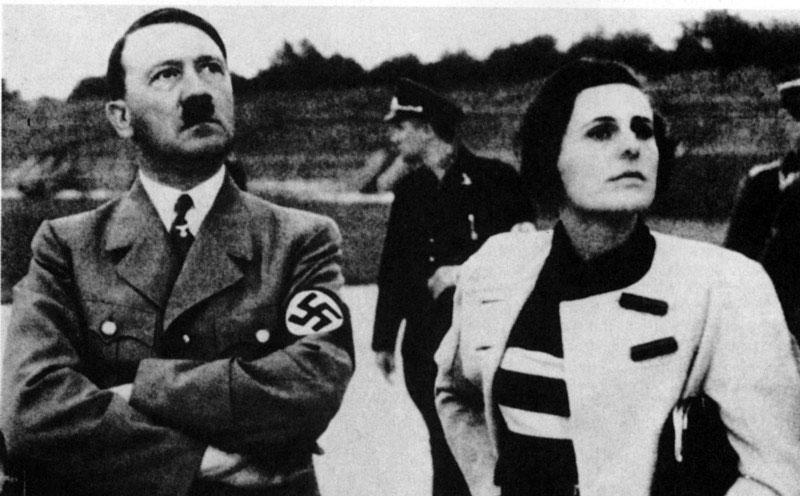 Hey–Nazis will be Nazis, right?

Now, for the record, I should say I revere the work of some of these people, am indifferent to some of their output, and loathe the creations of several others. That’s where taste, good or otherwise, comes into the equation for me.

That said, there can be no question that we are talking about a swarm of extraordinarily talented and visionary artists…whether I like their work or not.

As an audience member, I act on personal choice, seeking out and experiencing material to test my reaction-in order to avoid contempt prior to investigation.

Once this investigation is completed, I return to once again experience that which I find worthwhile, ignore that to which I’m indifferent, and occasionally express a negative opinion of what I loathe—with no expectations of any resultant sea change on any level, for anyone, anywhere, whatsoever.

To be clear—I can respect, while disagreeing vehemently, a well-considered opinion that is based on actual experience, genuine investigation, rather than that old devil, feelings—which, as frequently pointed out, are not facts.

That said, I hold in complete and utter contempt the He-Man Woman Haters Club, AKA ComicsGate, in its deployment of white supremacist, homophobic, Hypochristian fear of diversity in comics in the name of holding on to some delusional view of what comics are supposed to be—like all those right wing loons of all ages and sexes, but always white, who yearn to return to a nonexistent Elysium of the 1950s.

And yet, as this sad cabal of desperately disappointed and entitled boy-men displays its mortal terror at the very existence of an audience and talent pool that includes men and women of every fucking color in the rainbow…

…A cohort of religionists, agnostics and atheists; Gay, Lesbian, Bisexual, Transgender, Queer and any other fucking orientation that sees fit to make itself known in an American culture once defined by the very idea of diversity itself, in order to censor and destroy any aspect of comics that disputes their insipid fascist perspective…

…The illiberal left hands these Nazi adjacent, involuntarily celibate revanchist creeps the keys to the kingdom by insisting on a very specific and codified variety and version of diversity, gatekeeper equipped with a colossal asterisk.

If the white supremacists are guilty of exclusion, so are the so-called progressives culpable of selectivity in their principles.

The right wing of comic book talent and audience wants to eliminate the presence of anyone that bears no resemblance to their white supremacist fantasy selves—rejecting the current iteration of social and societal diversity and its presence and depiction in comics.

The left wing of comic book talent and audience wants to censor and eliminate material which transgresses and stands apart from what is a shifting and far from absolute checklist, by whatever standards are deemed worthy by the abstract and fungible neo-concept of woke today.

We can all agree that on a political level, both nationally and internationally, we are in serious shit. Democracy is on the chopping block, and the fascists are winning.

A major reason these miscreants are on the ascendancy is that they are a unified mob…a horde of miserably miseducated serfs, to be sure, willingly enabling their masters in the name of a misunderstanding of where they stand on the social food chain…but an organized force nonetheless, united in support of white identity politics. 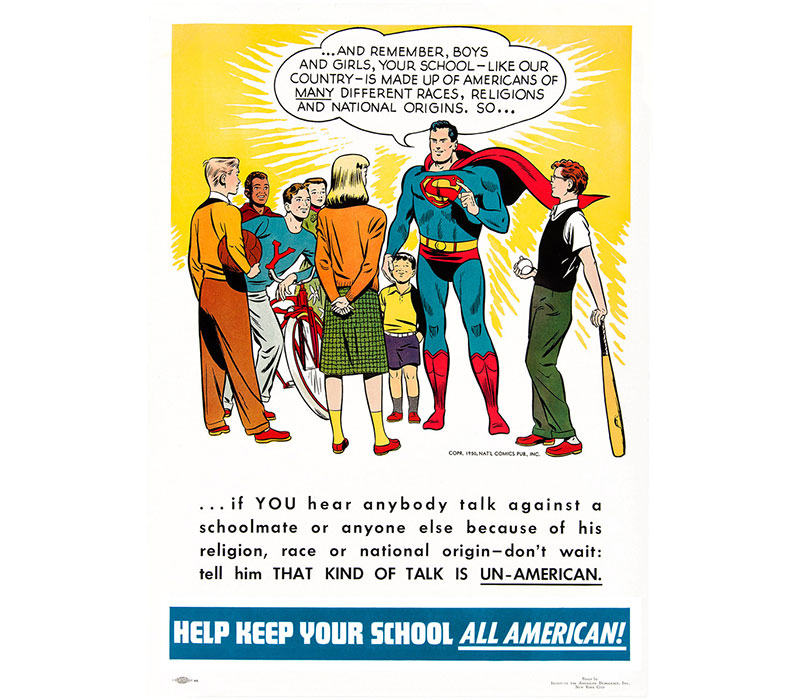 And this successful surge of fascist populism is given unwitting aid and comfort by a left wing made up of an increasingly large swarm of individual subgroups, each representing those individual diverse groups, each demanding that it be taken seriously and separately by its own terms of identification, while simultaneously insisting on its right to a dominant presence in a larger greater fabric…

…A left wing becoming increasingly specific in what it considers appropriate in the name of an increasingly narrow and often fatuous definition of diversity–and thus unwilling or unable to distinguish between a complex relationship and a hostile one.

This conflict has been playing out in comics for some time now, with the right attacking the left…and the left attacking the right, and itself, taking no prisoners on either side. Both sides come equipped with a guileless self-regard that would be vaguely and temporarily amusing in a child but is appalling in an adult.

Now, despite all the willfully ignorant fools out there who believe otherwise, I regard this cabal on the right with complete contempt. They represent a set of political and social values that are and always have been repellent to me. Whether they like it or not, admit it or not, they’ve made peace with racists, fascists and Jew baiters—all the while playing the victim. We are judged by our friends, after all, and these people are friends with no friends of mine.

By the same token, I hold much of the left’s swarm with a similar disdain, as their political and social values, supposedly in the name of diversity, are actually tools to censor work and ideas they hold in contempt—like their fascist cousins on the right, with merely a set of specific cultural differences in what is considered acceptable by their cadre.

Each of those microcosmic slivers of identity identifies as a victim, and is thus regarded with a reverence—and demands a cocoon of protection from ideas and images that run counter to an increasingly anodyne sensibility—not to mention embracing several religious subsets who identify as victims while deploying similar tactics of the fascist right.

And that brings us back to Robert Crumb. Over the course of a career covering well over a half century, this man has produced a body of work of extraordinary complexity and consistency. He’s dug deep into his own psyche, to deliver material of astonishing honesty, bordering occasionally on self-flagellation.

His work, particularly in the 1970s, was alternately filled with a frequently discomfiting blind rage about his relationship to the country he ultimately fled, to elegiac work about his love of traditional blues music and the now vanished culture it bred.

But through it all, Crumb was and remains a social satirist. A SATIRIST, for fuck’s sake. Decades of material soaking in irony—irony that has been brutally removed from any part of the national discourse—but irony nonetheless. 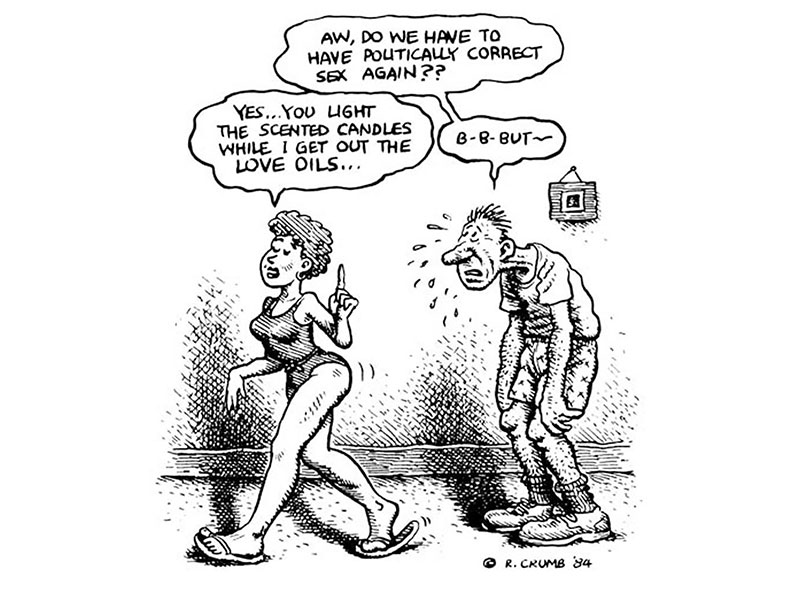 His work, at best, was dark, rage-filled comedy from a deeply eccentric man who, on the basis of what we know of his upbringing and personal life, could hardly be identified as the poster child of anyone’s idea of white privilege.

Crumb’s work depicted a racist, sexist, homophobic, misogynist, antisemitic culture in all its profane and misbegotten glory…but to mistake the depiction of this culture for an approving embrace of these sensibilities is insipid shmuckery at best, smug self-serving sophistry at worst.

But critics on the left—all too often third-rate talent unworthy of doing Crumb’s laundry—have done just that, as they frequently do with work that makes them uncomfortable.

Creative material equipped with concept, imagery and text that is often quite diverse, just not diverse in a way appropriate to the yardsticks deployed by the morally performative mouthpieces on that side of the aisle, is anathema to this side of the equation.

So, in sum, the fascist, white entitled right says “Fuck everybody who isn’t us…”

…And the illiberal, self-regarding left says “Fuck everybody that makes us uncomfortable.”

And I say fuck them both.