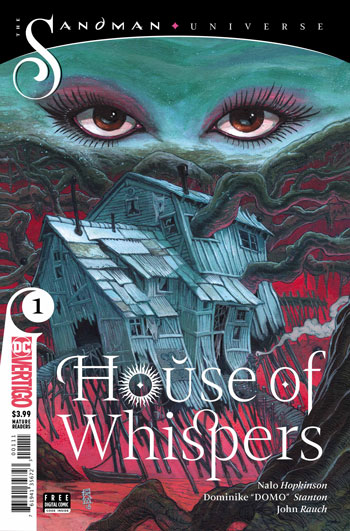 This is another Sandman tie-in that DC is releasing. It’s a nice way to bring back the now dormant Vertigo line which I just loved.

So this time, we are brought to the House of Whispers book. It’s a new book with new characters. This first issue isn’t bad but it’s a little difficult to see if the series will be any good in the long run.

This book introduces us to the House of Dahomey, on the houseboat of Erzulie Fréda, where the souls of Voodoo followers go when they sleep. The opening sequence introduces us to their methodology. A bunch of people arrive and there is a party going on. There’s even a mermaid there.

Then we cut to New Orleans. We see a young woman named Lumi on her cell phone.

Will Lumi be a major player in this book?

This was the only scene in the book I didn’t quite get but maybe it’ll be explained in upcoming issues!

The family appears here and there in the first issue but I’m unsure what they have to do with it all at the moment. They seem to have some connection with the houseboat and are able to affect that realm.

We then cut back to the party. There seems to be sinister forces at work. Eventually the issue leads to the end where the House of Dahomey is thrown into another dimension. And now it looks like it’s really going to get crazy.

I had a rough time trying to figure out what was going on. I think I eventually did. It just didn’t involve me as much as I hoped. The art isn’t bad but I am not sure this is going to last.

Hopefully it picks up. Right now it just didn’t involve me.