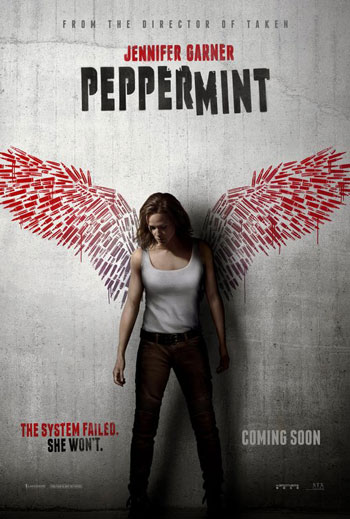 As a fan of Alias, I was excited to see that – after years of playing nice moms and doing lame commercials – Jennifer Garner was finally making another action movie.

This vigilante movie (from the director of Taken), has the killing of Riley North (Garner)’s family take place on her daughter’s birthday.

While eating ice cream! (The daughter’s favorite flavor, peppermint, is where the movie gets its uninspired title.)

And when Riley, hubby and daughter take goofy photos in a photo booth at the carnival, pre drive-by, it’s no surprise that the rest of the movie we see Riley clutching that bloodstained photo and tearing up.

Subtle, the film is not.

It’s also wildly, hilariously implausible. We can maybe buy that Riley is able to separately kill the three criminals who gunned down her family. But for her to string them all up, single-handedly, from a Ferris wheel? Well, the audience at my crowded press screening had a hearty laugh over that.

They also laughed when a dogged FBI agent shows a blurry YouTube video of Riley delivering a brutal MMA-style beat-down in a boxing ring somewhere in … Thailand, I think it was?

We’re supposed to believe that in the five years after her family’s death, Riley has undergone, unaided, a Bruce Wayne-type transformation and is now a one-woman killing machine. She’s somehow become Jason Bourne, John McClane and John Wick combined! Amazing!

Yet she’s not smart enough to cover her face while stealing military-style assault rifles, so the feds are easily able to track her various exploits. Thanks for keeping us in the loop, Riley!

This movie makes Law-Abiding Citizen – in which Gerard Butler was able to escape from prison on a regular basis and wipe out all his enemies – seem perfectly reasonable.

Making the movie’s key villain a heavily tattooed Latino drug dealer and his gang of thugs plays out as stereotypically as you’d expect. And, naturally, all the gunmen had extremely recognizable face tattoos that meant Riley (and Riley alone) was able to I.D. them. That’s thanks to the shoddiest line-up ever that includes only one guy with a facial tattoo in each group.

Riley also takes out corrupt white lawyers and judges who helped the killers get off scot-free, but she mostly spends the movie gunning down anyone who can speak Spanish – except for children and the drug dealer’s battered wife, of course.

She’s also become a guardian angel to two cherubic homeless kids in the Skid Row area where she’s been hiding out. As luck would have it, they happen to be the cleanest, most photogenic homeless kids you’ve ever seen. Maybe Riley, when she’s not busy killing drug dealers, is taking them out for a spa day.

Since the little girl she protects is black (as is the smart female FBI agent who figures out where Riley’s been hiding), that offsets the other racial stereotypes, right?

Oh, and there’s a black narcotics officer (Method Man) and an Asian-American cop.

The one good thing I have to say about the film is that Garner is in amazing shape. As she demonstrated on Alias, she makes a very convincing action hero. I just wish the film built around her action comeback wasn’t so terrible.

I’d love to root for Garner. But she, and the rest of the cast, deserve better. Atomic Blonde, this ain’t.