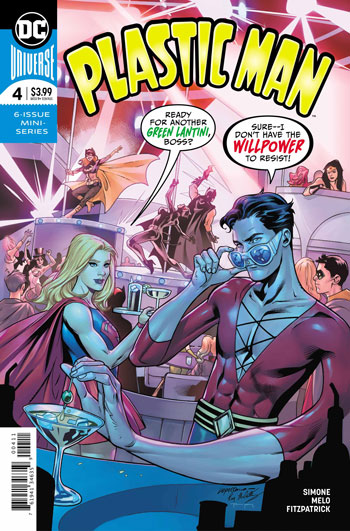 Gail Simone’s reimagining of Plastic Man continues as our hero tries makes a go at being a role model. Eel O’Brien tries to stay one step ahead of the Cabal, with his kid sidekick Pado Swakatoon in tow. It’s a nice breather in the midst of a story that’s been mostly chase-oriented.

On paper, Gail Simone’s zany sense of humor is perfect for Plas, but most of her jokes are rooted in references or dialogue, or feel more familiar coming from Deadpool.

While Adriana Melo is adept at handling gags, the series often feels like its mix of cartoon noir is straddling the line of incongruity.

Fortunately this issue seems more occupied with exploring Eel O’Briens’s relationships to his new friends, an emotional thread holding the jokes together.

There are moments that work, especially the opening scene, where Sammy’s moll is revealed to have developed a “skin condition” of her own after having been doused in the chemicals that created Plastic Man, as well as his dancer friends using their unique skills to find information for him. Plas’ relationship with Pado Swakatoon has also grown into something surprisingly sweet.

The best moment, however, is the end, which finally gives an inkling of what Plas is dealing with: some of the greatest criminal minds in the DC Universe.

It’s too bad he drove off the one special agent who could help him out. With two issues to go, we’ll find out how much that costs Plastic Man.