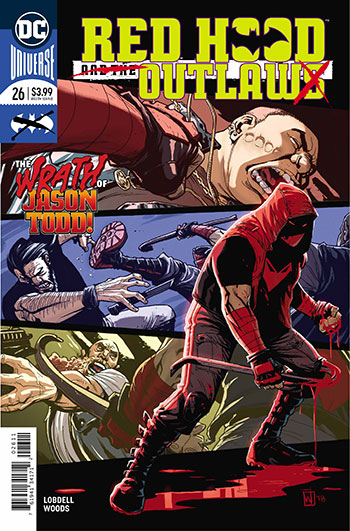 This book has been on fire lately. This issue picks right up from the last issue and the recent annual. The Red Hood is on the run. The title for this storyline is “Outlaw.” I saw that and I was immediately drawn in to it.

We open into a scene with the Red Hood traveling on a bus at 2AM somewhere in America. The bus driver won’t shut up.

Suddenly, he stops short. There is a body in the road. They get out to observe who it is. It is FBI Agent Melissa Mitchell. She’s alive but tells them to leave. That it’s not safe for them. Guess what Jason Todd decides to do?

I can tell you this much: he doesn’t leave.

From there, Jason tells her that he isn’t leaving without her. We then meet the biker gang that Mitchell had come up against.

They are now going to have to fight Jason as well.

And he takes them down!

He then reveals himself to Mitchell who tells him that he’s under arrest! But the threat of the biker gang isn’t over. Jason now suits up. He wears a new costume. And he’s not in a very good mood.

The rest of the issue is awesome. The Red Hood fights the gang and it’s well drawn by Woods. He’s underrated and he does an amazing job here. It ends like you might expect but the journey is all. And the journey is pretty great too.

This is a solid new direction for this series. I’m liking it a lot, even though it was always good. Now it’s time to see what else Lobdell has up his sleeve. I’m looking forward to it.