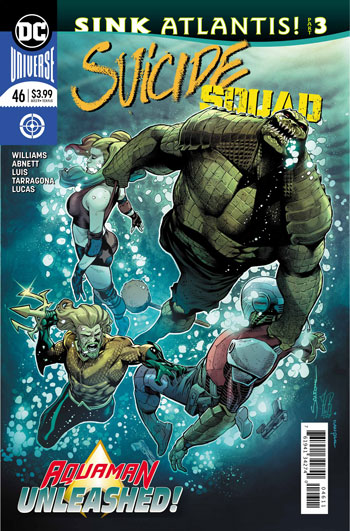 This is the third part of that nutty storyline where Atlantis comes to the surface. The Suicide Squad is on a mission to sink the place and destroy it. And so then, we were off! And it’s been a guilty pleasure for sure.

In the beginning of this issue, Aquaman is out recruiting allies. He goes to see the deadly King Shark. He makes King Shark see his point of view. The Suicide Squad is trying to kill them and he’s going to need everyone he can get!

We then see the Suicide Squad trying to break in to a certain part of Atlantis. They are going to leave the payload and blow it up.

Harley reveals that payload happens to be a nuclear bomb. This puts the Suicide Squad at odds with one another and it puts teammate against teammate! It’s some exciting stuff indeed.

Then, Aquaman shows up with his makeshift team and all hell breaks loose in an underwater battle royale!

Things are getting even worse on the surface world. Mera has had it and tells the representatives for the world that if Atlantis falls, so shall the surface world! She even has the tides ready to do a big tidal wave. Things aren’t looking good!
The story is typically bananas. The art is pretty spiffy. All in all it’s entertaining and you don’t have to turn your brain on for it. And sometimes, that’s a good thing.