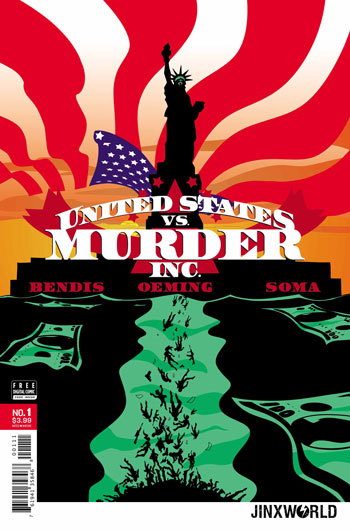 Staying in the crime realm, the duo traded capes for suits, telling an alternate history story of an America torn apart by organized crime.

Marvel canceled the book last year, three years after the first volume came to an end, but DC has given Bendis his own Jinxworld imprint, and so he has revived the book.

If you haven’t read the first series, fear not: this first issue is a flashback, delving into the origins of enforcer Jagger Rose. Born into crime, she demonstrates not only an aptitude for the business but also an eagerness to take after her late father.

If any steam was lost, it doesn’t look it. Bendis’ writing is spare and powerful, and Oeming slams homers all over the place with his inventive, beautiful layouts.

Add Taki Soma’s deep colors into the mix, and you have an evocative return to form that promises riches down the road.

The United States vs. Murder Inc. #1 is a fine jumping-on point and a wonderful new beginning for what looks to be an epic crime saga.