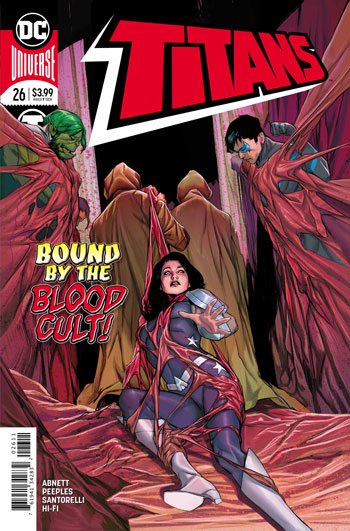 “There is a dark energy at work here. A signal, like airborne rage. A bloodlust.”

In the previous issue of the Titans, we learned that the nefarious Blood Cult has been quite busy lately, even with Brother Blood off the board locked away down deep in Damian Wayne’s secret dungeon.

Under the leadership of the mysterious, but no less malevolent-seeming Mother Blood, the secret psycho-society has been actively developing the technology to collect ambient Source Energy and channel it to deliberate purpose.

So, what does a quasi-religious cult of murderous personality do when they get their hands on a near-omnipotent wellspring of God-like power?

Well, construct a deadly army of man-shaped creatures from the blood of a thousand ritual sacrifices. And then set them to kill the Titans.

Imagine our team’s consternation. I mean sure, the Blood Cult has always been bad news. But now, somehow, they’re several steps ahead of the game, a game it seems they plan to win… with as much blood on their hands as possible. And unless the Titans can figure out some way to counteract their technology, it seems their methods will be as devastating as they are gruesome.

Takes the idea of drawing strength from the blood of your victims to a whole new level.

Good thing the Titans have Natasha Irons. And the nimble mind of Mr. Ben Rubel who has, somewhat strikingly, managed to cobble together the very first Source energy-collecting capacitor doohickey, a feat that has earned him a close, helpful presence on the team.

Rubel, despite his complete lack of superpowers, and somewhat (apparently) less than super-genius level technological brain-power, shows he has the tenacity and the grit to stick it out in waters that are clearly way over his head, rather adeptly earning the trust of the team and, notably, Dr. Irons herself. (Good thing for M’gnn, too.)

I mean, not to be too cynical. I’ve probably been looking more askance at everything about this book a bit more than has really been entirely warranted. But then, I know that Dan Abnett likes his plot twists. And it’s not like the Blood Cult doesn’t have a history of sleeper agents.

In fact, the first time we were introduced to Brother Blood, waaay back in the late 1980’s, that agent turned out to be… Dick Grayson.

So, I’m just saying. There’s likely to be some secrets under the surface here. And not just M’gnn’s. Or ‘Raven’s’. Or Donna’s. You know – the one’s we already know about. (Or are about to.)

But look, I’ll give Ben a chance. He seems like a good egg. Maybe that’s all he is. Mind you, there’s not a lot of chance that hanging out with this crowd, and dealing with all this Source energy, is going to keep him at non-powered status for very long. Something he seems blithely unaware of.

For that matter, the whole team seems remarkably over-exposed to a lot of this Source stuff, without much dramatic fallout so far. Just take this issue for example. So, we’ll have to see how that all plays out.

For now, Mother Blood’s opening gambit appears to serve an important purpose for our team. Now they have a real opponent in this game, one they cannot afford to lose to.

After all, if the first issue of this series is any indication, the deep running currents of the Red may be a vector of power that extends quite a bit further out there, than just the life that runs through our own small planet..

Next Issue: Ion ‘a hold your ha-aaa-and…