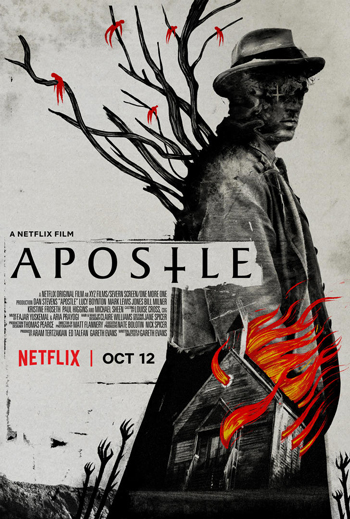 After making the sensational action films The Raid: Redemption and The Raid 2 in Indonesia, Gareth Evans returns to his native Wales for an entirely different kind of movie.

His first horror film is a bloody period piece set in Wales, 1905.

Per the press notes, it was inspired by such films as Ken Russell’s The Devils, The Wicker Man, and the 1968 Vincent Price film, Witchfinder General.

I’m not saying the film succeeds in its emulation of those horror classics, but it is a wonderfully strange, demented movie, once it unleashes its own weird vision of medieval tortures, mysterious blood-letting, and unique form of nature worship.

The film begins on a feverish note as an agitated Thomas Richardson (Dan Stevens) journeys to a remote Welsh island to rescue his kidnapped sister, Jennifer (Elen Rhys).

Thomas having returned from his own harrowing ordeal, was presumed dead by his family. He doesn’t intend to ransom Jennifer, but to bring her back by any means necessary. The ransom letter was addressed to his now-deceased father, which means the kidnappers are not expecting him.

As Thomas, Stevens is so perpetually on edge and so jumpy, it’s a miracle he’s able to infiltrate the batch of newcomers to the remote island without being suspected. It’s a bit of a stretch that he goes undetected as long as he does.

In the most conventional aspect of the story, the leader of the cult, Prophet Malcolm (Michael Sheen) has a beautiful young daughter (Lucy Boynton of Sing Street), who naturally falls for Thomas. And he finds an unlikely ally among the villagers, which is also very convenient.

The script is fairly hazy about the appeal of Erisden, the apparently self-sustaining town built on the island. Malcolm preaches equality and that must have been the draw for the handful of black townspeople (none of whom have any lines, for what it’s worth). And a woman who arrives on the same boat as Thomas announces she was once arrested for vagrancy: Erisden appears to be a kind of haven where no one ever goes without.

Except that the island’s crops are failing (any folk horror fan can guess where that leads) and if Malcolm doesn’t get the ransom money, the whole society may fall apart.

As Thomas lays low and tries to find his sister, he learns that any “blasphemer” who tries to leave Erisden is dealt with most severely. Malcolm has his own special guard and his right hand man Quinn (Mark Lewis Jones) is not afraid to spill copious amounts of blood.

Sheen makes a compelling villain, but Lewis (who’s also Welsh) steals the show. The actor, who’s been in everything from Game of Thrones to Star Wars: The Last Jedi, has a formidable presence that recalls more famous countrymen Richard Burton and Anthony Hopkins.

The film takes a bit too long to reveal its particular demons, but when it does, it’s a wild ride.

If it hadn’t been preceded by Hereditary and Mandy, it might have been the craziest, most hallucinatory horror film of the year.